COVID-19 fallout: Amarnath Yatra 2020 to happen with only 500 pilgrims 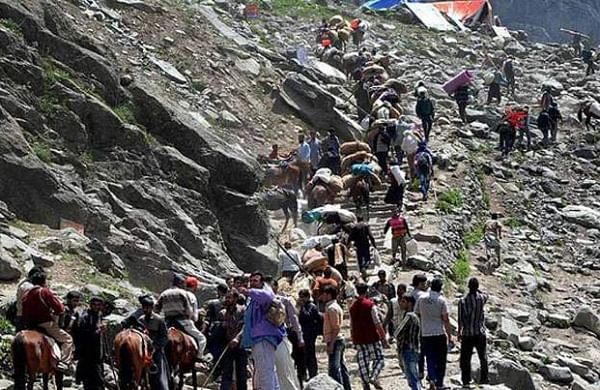 SRINAGAR: Amid surge in coronavirus cases and closure of religious places in Jammu and Kashmir, the government would be allowing 15 days of Amarnath Yatra with 500 yatris.

The pratham (first) puja at the cave shrine was held by Lt Governor G C Murmu on Sunday. In addition, the authorities said all the yatris would have to undergo testing before being undertaking the yatra.

Murmu, who is also chairman of Shri Amarnath Shrine Board (SASB) visited the cave shrine in Anantnag in the morning today and performed the pratham puja. The puja was telecast live by Prasar Bharati.

The puja would be telecast live everyday by the Prasar Bharati for the devotees across the country.

The annual yatra, which was scheduled to start from June 23, is likely to be a 15-day affair now. Although officials are tightlipped about the start of yatra, sources said the yatra would start on July 21 and culminate on Raksha Bandan on August 3.

According to sources, the yatra would not be allowed from the traditional Pahagalm route in south Kashmir’s Anantnag district but from shortened 14-kms through Baltal route in central Kashmir’s Ganderbal district.

It has also been decided that all the yatris would be tested (RTPCR test) for Covid-19 and only negative cases would be allowed to undertake the yatra.

“All entrants into J&K including yatris will have to be tested and quarantined till they are reported to be negative,” J&K Chief Secretary B V R Subrahmanyam said in the meeting adding camping facilities earlier utilised for yatris at entry points (yatra niwas) are currently being utilized as quarantine centres.

Yatri Niwas to be used as base camp

The Yatri Niwas at Bhagwati Nagar would be used as the base camp for the upcoming pilgrimage to the holy cave shrine of Amarnath in south Kashmir Himalayas, an official said.