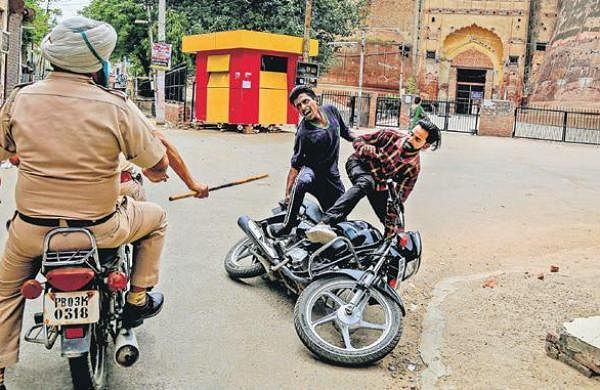 CHANDIGARH: Four new cases of COVID-19 have been reported from Punjab on Wednesday taking the total number of cases in the state to 45. Three of the cases are from Mohali while one is from Amritsar. Meanwhile, paramilitary forces have been deployed at a few places in Jalandhar as people were not observing the curfew imposed in the state till April 14.

Deputy Commissioner of Mohali Girish Dayalan said that two of the cases were an old woman and her 10-year-old granddaughter from Phase 9, while the third case is a 45-year-old man from Jagatpura village who came in contact with the 22-year-old man of Sector 30 in Chandigarh who had returned from Dubai and tested positive on March 27.

With this, the total number of positive cases in the district has gone up to 11. Civil Surgeon of Mohali Dr Manjit Singh said that the man has been admitted to the
isolation ward at Gyan Sagar Hospital in Banur and is stable. He said they
had also taken samples from the affected areas for testing.

Sources said the former granthi (preacher) of the Golden Temple Nirmal Singh Khalsa who had returned to Amritsar from the UK has also tested positive for COVID-19. He had complained of a cough and cold and was admitted to the Guru Nanak Dev Hospital.

Meanwhile, to maintain law and order in Jalandhar, the district administration
has deployed six sections of the Central Reserve Police Force (CRPF). Jalandhar Commissioner of Police Gurpreet Singh Bhullar said that the CRPF have been deployed to supplement the Commissionerate Police at vulnerable points and hot spots in the city.

He said that out of these, four sections would be deployed at Dilkusha Market and the vegetable and fruits market at Maqsoodan to ensure that only those who have been allowed for movement at these places could access it. He said that both these places have now been sealed by the forces and only authorized people having passes would be allowed to enter them.

Bhullar unequivocally said that no loitering at both these places would be allowed and strict action would be taken by the police and the paramilitary force against unauthorized persons at these places.