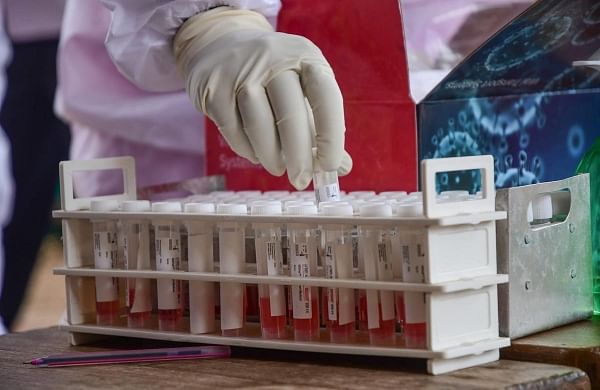 As many as 15 villagers, whose throat and nasal swab samples were not taken for testing, have been declared positive for the deadly novel Coronavirus in Dhar district of Madhya Pradesh.

While a detailed probe has been instituted by the Dhar district administration into the lapse, two contractual employees, who had gone to the Tana village in Nisarpur block of Dhar district on September 8 to test the villagers for the deadly viral infection have been fired from their jobs.

While the two health workers took the nasal and throat swab samples of four villagers, samples of other villagers couldn't be taken, as the villagers either refused to give their samples or went out of the village to avoid giving samples.

The two health workers, however, returned with tubes bearing samples of 19 villagers, including four persons whose samples were actually taken. The collection tubes had names of 15 others who were not present in the village.

The health workers got the names from the village population register maintained by the village sarpanch and panchayat secretary.

The 19 sample tubes were subsequently for RT-PCR test at the laboratory in adjoining Indore.

A few days later, the reports of 17 out of the 19 samples were out, all of which were COVID-19 positive.

Harjit Mujalde, one of the Tana village residents who were among the 15 persons tested COVID-19 positive, despite have not given his swab samples on September 8 said, "I was not present in my village that day and had gone to another village, so my samples weren't taken. How am I COVID-19 positive? This is nothing but a major lapse and exposes corruption in COVID-19 testing."

Another Tana village resident Kamal Mujalde, who is a government employee, too was shocked on coming to know about having tested COVID-19 positive, despite not giving swab samples.

He said, "The day the health workers came to our village, I had gone for a departmental meeting in Bhopal, so how can my samples test positive for COVID-19? The other 14 residents of my village too have tested COVID-19 positive despite not being present in the village, the day the samples were collected. Those persons either live in Kukshi (Dhar) or Indore or else were not present that day in the village."

According to Dhar district collector Alok Singh, the services of both the contractual health workers have been terminated as the primary probe has revealed a prime facie lapse on their part.

One of the two sacked contractual health workers, the lab technician Gumansingh Chouhan, however, blamed the COVID-19 testing lab in Indore for the gaffe.

"We've been regularly facing the ire of villagers, who allege they are being wrongly tested positive. We wanted to check whether the lab in Indore is actually testing the samples correctly or not, owing to which along with actual samples, we also sent some tubes containing viral transport medium (VTM) without swab.

Since some tubes didn't contain the actual swab samples, they should have been bracketed as rejected by the Indore lab.

Instead of rejecting those samples, which only contained VTM without swab, how can the Indore lab test them as COVID-19 positive?

The lapse and irregularity has happened at Indore lab's end and not by us, just to save the Indore lab officials, we've been fired," the terminated health worker alleged.