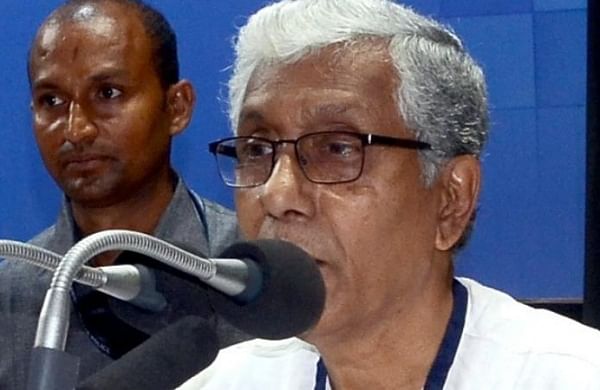 AGARTALA: Former chief minister Manik Sarkar on Thursday said at least 150 CPI(M) leaders and supporters have been assaulted in Tripura by miscreants bearing allegiance to the ruling BJP during the recently held by-elections in the state, a charge denied by the saffron party, Sarkar, who headed a delegation of party leaders to Raj Bhavan, also said that he has submitted a list of activists and supporters who have been targeted before and after the election to Governor SN Arya, and sought his immediate intervention.

"We met the governor and apprised him of the unprecedented violence unleashed on CPI(M) leaders and supporters across the state. A list of victims was also given to the governor, who is the constitutional head of the state, seeking action against the attackers," Sarkar told reporters.

Another team of CPI(M) leaders called on Director General of Police (DGP) VS Yadav, during the day, and briefed him on the instances of poll-related violence.

The delegation submitted a separate memorandum to the top officer, highlighting the incidents of violence and demanding a probe into the cases.

The DGP, however, tried to downplay the attacks, saying that the police won't be able to act unless complaints are registered, CPI(M) MLA Bhanu Saha claimed.

Sarkar, dismayed over the DGP's alleged stance, pointed out that the police could lodge suo-moto cases in such matters, "as had been directed by the Supreme Court".

"We strongly object to the DGP's handling of the violence. The Supreme Court has already ruled that the police could take suo-moto case if the victim failed to lodge a complaint due to fear. Therefore what prevents the police from doing so," he said.

Alleging that the BJP was using the miscreants to vitiate the atmosphere in the state, Sarkar urged people to resist the fascist rule in Tripura.

"We have seen voters come out of houses defying attacks, threats and intimidation on the day of polling to exercise their franchise. This is a silver lining," he said.

By-elections were held to four Assembly seats in Tripura recently, three of which were bagged by the BJP and one by the CPI(M).

BJP spokesperson Nabendu Bhattacharjee, however, rubbished the allegations as baseless The BJP doesn't believe in violence.

"We don't want to give much importance to the allegation raised by communists," he said.