20 killed in floods, landslides in Assam, Meghalaya; rivers in spate 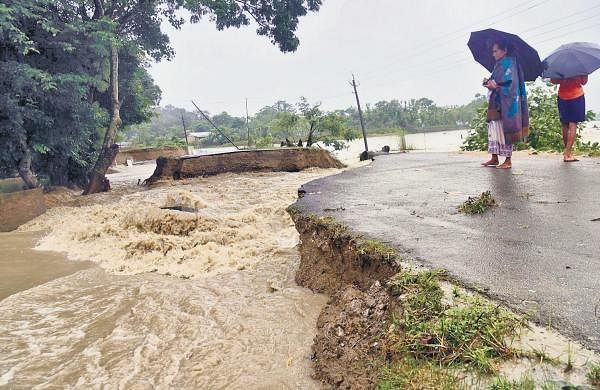 GUWAHATI:  Twenty people died in the rain-induced floods and landslides in Assam and Meghalaya on Friday. While seven persons died in Assam, the remaining 13 were residents of Meghalaya. “As per flood data till 8 pm, 22 districts and 11,03,026 people have been affected. Seven persons died,” the Assam State Disaster Management Authority said.

With these, 52 persons have lost their lives in floods and landslides in the state since May. Cropland in 20,141.99 hectares has been affected. Rivers such as Brahmaputra, Kopili, Jia Bharali, Puthimari, Manas and Beki are in a spate, flowing above the danger level. Several areas of Guwahati, Rangiya and Nalbari remain inundated.

The National Disaster Response Force and the State Disaster Response Force, among other agencies, are engaged in the rescue and evacuation of the marooned people. In Meghalaya, 13 persons lost their lives in landslides. The deaths were reported from three districts – East Khasi Hill, South West Khasi Hills and South Garo Hills. In one of the incidents, three members of a family, including a minor, lost their lives.

Several roads are either damaged or have been washed away. The movement of vehicles from Assam’s Brahmaputra valley to Barak valley has been disrupted following landslides in Meghalaya through which the road passes. The Regional Meteorological Centre has issued a warning for thunderstorm with lightning and extremely heavy rain at isolated places in parts of the Northeast.

Highest single-day rainfall in June
Guwahati: Mawsynram in Meghalaya on Friday recorded the highest all-time single-day rainfall in June. At 1,003.6 mm, it eclipsed the previous record of 945.4 mm measured on June 7, 1966. Cherrapunjee on Friday recorded the third highest rainfall of 972 mm in June. The all-time highest rainfall (1,563.3 mm) here was recorded on June 16, 1995 and the all-time second highest (973.8 mm) rainfall was recorded on June 5, 1956. According to the RMC, Mawsynram gets higher rainfall due to its higher elevation and location on crest of a hill on the edge of a valley opening towards the south.