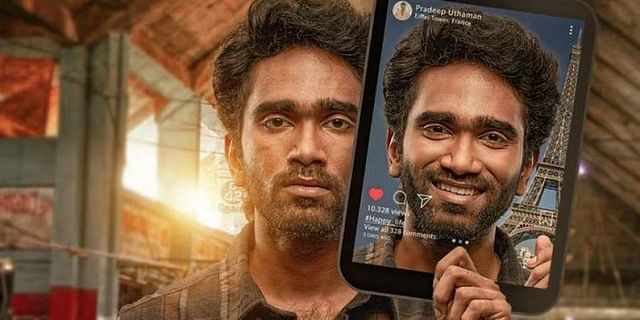 Every new year begins with a sense of hope. Like Andy Dufresne of The Shawshank Redemption said, hope is indeed a good thing, and no good thing ever dies. It is this 'hope' that propels many dreamers despite the umpteen stumbles and setbacks. For some, it might take years to succeed, and for some, it might just be the case of getting the first step right. It depends on many factors—talent, hard work, luck... or is it just a matter of being there at the right place at the right time? I guess it's the combination of all these factors. Here, we look at some of the year's brightest talents from Tamil cinema who got this combination right and managed to leave a lasting impression.

Pradeep Ranganathan (Actor-director, Love Today)
Though his directorial debut Comali (2019) was a bonafide success, it was his sophomore film, Love Today, which also launched him as a lead actor, that put Pradeep on the map. Delivering a supremely entertaining new-age love story, Pradeep shone not just as a filmmaker but also as an actor and lyricist. Marching past all the trolls, the youngster now finds himself at a place where there are serious talks about the possibility of him directing superstar Rajinikanth. How cool is that?

Aditi Shankar (Actor, Viruman)
Yes, Aditi broke into the scene as ace filmmaker Shankar's daughter. But it was not soon before she carved a niche for herself. With her debut outing Viruman, Aditi proved her skills as a feisty actor, a brilliant dancer, and a talented singer. Not to forget her jovial off-screen persona that made her a meme-favourite among netizens.

Aishwarya Lekshmi (Actor, Ponniyin Selvan 1, Gatta Kusthi)
Though it has been five years since her debut, 2022 is the real game-changer for Aishwarya. While she did have multiple successful films in Malayalam and Telugu, Aishwarya's distinct work in Tamil finally put her on the forefront of Tamil cinema. Be it her performance as the alluring Poonguzhali in Ponniyin Selvan 1 or the gutsy Keerthi in Gatta Kusthi, or even the impactful cameo in Gargi, Aishwarya managed to win the hearts of the Tamil audience in 2022. Also, she won brownie points for choosing the well-appreciated Gargi to be her debut production in Tamil.

Dushara Vijayan (Actor, Natchathiram Nagargiradhu)
Although Dushsara started the year on the wrong foot with Anbulla Ghilli, fortunes changed for her when Pa Ranjith trusted her with the lead role of his most ambitious experiment yet. It is not often that a female actor gets a character that's as layered and complex as Natchathiram Nagargiradhu's Rene. Dushara ensured she made the best of it with a feisty act that should easily find a spot in every year-ender Best Performances list.

Gautham Ramachandran (Director, Gargi)
Bouncing back from the results of his debut, Richie, Gautham cemented his place in the shining stars of 2022 with his sophomore film, Gargi. One of the most discussed Indian films of the year, Gargi, showcased the advocate-turned-filmmaker's ability to show remarkable restraint in making a social drama that drives home the hard-hitting reality about safety being just an illusion. (THE NEW INDIAN EXPRESS)