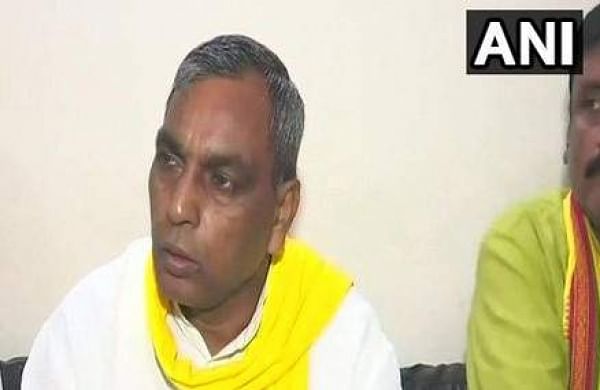 LUCKNOW: The realignment of political forces in Uttar Pradesh is taking place at a fast pace now as former minister in the Yogi Adityanath government and Suheldev Bhartiya Samaj Party (SBSP) chief Om Prakash Rajbhar on Wednesday sealed a pre-poll alliance with the Samajwadi Party for the 2022 Uttar Pradesh assembly elections.

Rajbhar, along with Chief General Secretary of SBSP Arvind Rajbhar, met SP chief Akhilesh Yadav in Lucknow and said that now the SBSP and Samajwadi Party will go together to ensure the defeat of the Bharatiya Janata Party.

Taking to Twitter after meeting Akhilesh Yadav, Rajbhar posted: “This time, the BJP will be wiped out. Samajwadi Party and Suheldev Bhartiya Samaj Party have come together. The days of the BJP government, which betrayed all sections along with Dalits, backward minorities, are numbered. Had a courtesy meeting with former CM and SP Chief Akhilesh Yadav today.”

The SBSP chief had recently said that anything was possible in politics and had given hints of rejoining the NDA. He had also kept a list of conditions for the BJP. Rajbhar had also met UP BJP chief Swatantra Dev Singh at his residence some time back fuelling speculation of an alliance with the BJP once again.

However, interacting with mediapersons later, SBSP national spokesperson Piyush Mishra said the decision on the alliance was final but seat-sharing would be finalised later. He claimed that more and more parties of the Bhagidari Sankalp Morcha, which Rajbhar was heading, would also be adjusted in the alliance.

Rajbhar has been spearheading a campaign to take smaller regional and caste-based parties along. He had named a conglomerate of 10 smaller parties as Bhagidari Sankalp Morcha. However, Asaduddin Owaisi's AIMIM is also a part of the Bhagidari Morcha.

On the question of AIMIM chief Asaduddin Owaisi being part of the Morcha or not, Mishra said that if required, the SBSP would part ways with AIMIM as things were not yet final regarding the AIMIM coming along with them in the Morcha. It may be recalled that Owaisi has been a strong critic of the Samajwadi Party claiming that it had used Muslims only as a vote bank and had not done anything concrete for their uplift all this while.

The Rajbhar-led Bhagidari Sankalp Morcha had announced a big rally in Mau on October 27, and it is now expected that Rajbhar may share the stage with Akhilesh, who already has a programme scheduled in neighboring Ghazipur district the same day.

About seat sharing, Rajbhar said even if the Samajwadi Party did not leave a single seat for the SBSP, he would still contest the 2022 polls in alliance with Akhilesh Yadav.

Meanwhile, in an official statement, the Samajwadi Party also confirmed joining hands with the SBSP for the 2022 polls. “The Samajwadi government under the leadership of National President Shri Akhilesh Yadav has done countless works for the poor, downtrodden and backward classes, including the underprivileged, exploited, farmers, youth, women, businessmen. Suheldev Bharatiya Samaj Party, which has raised the voice for the rights of the weak, along with the Samajwadi Party, is ready to take UP on the path of development. This is the beginning of the end of the oppressive rule of the BJP,” the party stated.

“There are 18-22% Rajbhar voters in Purvanchal with SBSP. The party has influence in more than 150 seats of Purvanchal. There is deep penetration in the assembly seats of Varanasi division, Devipatan division, Gorakhpur division, Azamgarh division of the state. SBSP also has a strong hold on sub-castes like Bansi, Aarkh, Arkvanshi, Kharwar, Kashyap, Pal, Prajapati, Bind, Banjara, Bari, Biar, Vishwakarma, Nai and Paswan,” it added.