5 Rafale, 70 other aircraft to feature in 'grandest flypast ever' on R-Day 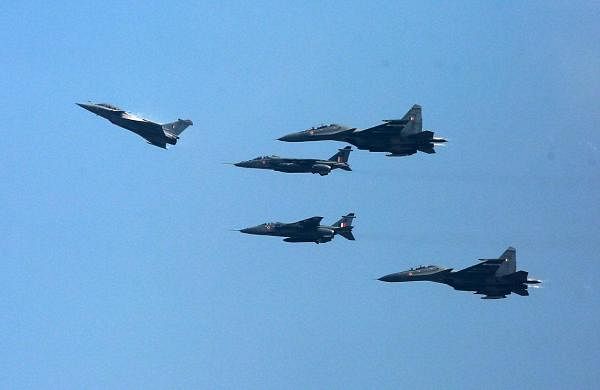 NEW DELHI: The Republic Day parade this year will showcase 75 aircraft as part of the flypast over the Rajpath with the Supreme Commander President Ram Nath Kovind taking the salute from the marching contingents.

The culmination of the flypast will be with the “Amrit Formation” in which for the first time, 17 Jaguar fighters will fly in the shape of 75, to celebrate Azadi ka Amrut Mahotsav.

Speaking online to media, IAF’s Western Air Command PRO Wing Commander Indranil Nandi said, “The grandest flypast ever will take place over Rajpath during the Republic Day parade with 75 aircraft including the planes from IAF, Army, and the Navy. This is in line with the Azadi ka Amrut Mahotsav celebrations.”

Newly-inducted Omni role combat aircraft Rafale will be showcasing its manoeuvers in three formations -- Vinash, Baaz, and Vijay. While a total of five Rafale would take off from Ambala airbase to flypast over the Rajpath in Vinash formation, the other two formations will include one Rafale.

Of the total of 75 aircraft of the three forces, there will be 28 helicopters including 8 Mi-17s, 14 ALH, 1 Mi-35, 4 Apache and 1 Chinook (transport). Among the eight aircraft in the transport category, one vintage aircraft Dakota, two Dornier 228, three C-130, one P-8I, and one AEW&C will be participating.

Of the multiple formations flying on display -- Tangail and Meghna formations will be dedicated to commemorate India’s victory over Pakistan during the 1971 war and liberation of Bangladesh.

Meghna Formation, consisting of one Chinook and four Mi-IV, and Tangail formation which will consist of one Dakota flanked by two Dornier 228 will be in the memory of the successful Tangail airdrop of the Indian Army’s second Parachute Battalion at Tangail, in erstwhile East Pakistan on December 11, 1971.

The battalion group under the command of Lt Col Kulwant Singh Pannu along with an Artillery Battery of 17 Parachute Field Regiment, platoon of 411 (Independent) Parachute Field Company, medical detachment, surgical team, and other administrative troops from the Shatrujeet Brigade was airdropped and tasked to cut off the retreat of the Pakistani troops from the north towards Dhaka.