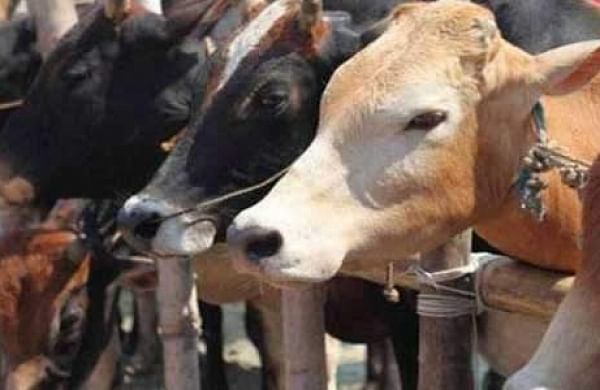 LUCKNOW: Around 61 cows have reportedly died in a cow shelter in Santhalpur village of Hasanpur development block in Amroha in western UP since Thursday. According to district authorities, the cattle died after consuming fodder that was allegedly laced with poison.

According to Animal Husbandry data, the state currently has 6,222 cow shelters housing 8.55 lakh homeless cattle. The Uttar Pradesh government has set a target of providing shelter to at least 10 stray cows daily in each of the 75 districts of the state where stray cattle was one of the most talked about issues during the recent Assembly elections.

As per sources, an hour after eating the fresh fodder sourced from a farmers Tahir in the village, a cow started frothing from the mouth and died within a few minutes in Santhalpur Guashala. This was followed by dozens of other animals suddenly falling ill and dying one after the other after they were fed the same fodder that was purchased from Tahir on August 3.

According to Amroha DM Balkrishna Tripathi, the Gaushala had 188 cows under its care.

While 55 cows died on Thursday after eating the contaminated fodder, six more succumbed till Friday morning taking the toll to 61. Moreover, around 50 cows are under treatment.

Amroha DM stated that an FIR has been registered against the person named Tahir who had supplied the fodder on the day. Teams were formed to nab him.

"The village Development Officer Mohammad Anas who was responsible for the maintenance of the said Gaushala has been suspended," said the DM, adding that a probe was also ordered to ascertain the cause.

"ACS and Director, Animal Husbandry and Divisional Commissioner, Moradabad have been directed to investigate the incident and submit a report. The incident is very saddening. Anyone found guilty will not be spared," tweeted UP CM Yogi Adityanath.

The CM also rushed Animal Husbandry Minister Dharmapal Singh to Amroha to take stock of the situation. The CM has asked for proper care and treatment of the cows that are sick.

Besides, DM Balkrishna Tripathi, DIG Shalabh Mathur, senior officials of the animal husbandry department and veterinary doctors had been staying put at the spot.