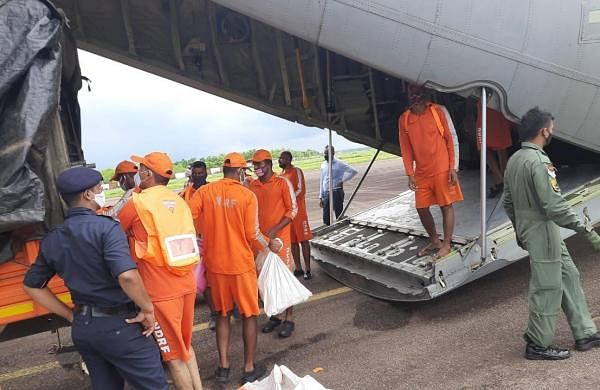 BHUBANESWAR: About eight teams of the National Disaster Response Force's (NDRF)  on Friday left for rain-hit Maharashtra and Goa to assist rescue and relief operations in the two western states.

The teams of NDRF's third Battalion at Mundali in Cuttack district carrying outboard motorboats, and collapsed structure search and rescue (CSSR) equipment with them left in three aircraft. Each team consists of at least 25 personnel.

"The teams left for Maharashtra and Goa in three Indian Air Force's (IAF) special flights. Four teams will be deployed in Pune and two each in Ratnagiri district in Maharashtra and Goa," an NDRF official told The New Indian Express.

The teams are carrying flood equipment. They also have CSSR equipment to carry out rescue operations in case any structure collapses due to the floods and people are trapped under the debris, he added.

NDRF sources said two teams left for Goa at 12.15 pm, as many teams then left for Ratnagiri district and four teams were dispatched to Pune from Biju Patnaik International Airport (BPIA) in Bhubaneswar.

Heavy rainfall in Maharashtra has wreaked havoc as 35 people have been killed. Sattari in Goa, which is close to the Konkan region of Maharashtra, has been flooded too.

As many rivers in Raigad, Thane, Ratnagiri, and Kolhapur districts are flowing at dangerous levels, NDRF, Coast Guard, Navy, and Army personnel have been deployed.