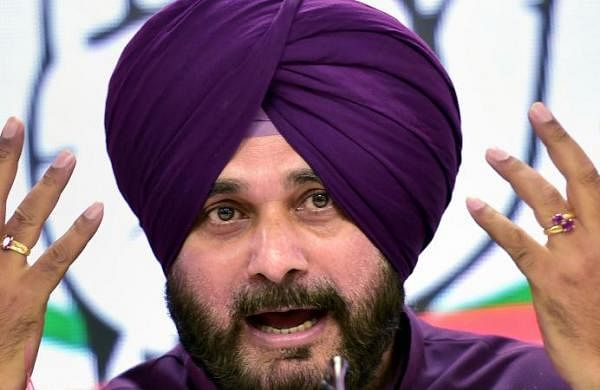 CHANDIGARH: After months of "self-imposed" political exile, Congress leader and former Punjab Minister Navjot Singh Sidhu was seen at a public function in his hometown Amritsar that was attended by his political rivals, including former Akali minister Bikram Majithia.

Sidhu, who was made a star campaigner by the party in the recently concluded Delhi Assembly polls, abstained from electioneering.

Missing from the public glare for over seven months, even at the cost of remaining absent from the Assembly sessions, Sidhu finally surfaced sitting with Akali Dal breakaway group Akali Dal Taksali leaders, including former minister Ranjit Brahmpura, besides Congress MP Gurjeet Aujla and his political rival Majithia.

The cricketer-turned-politician was seen sharing pleasantries with Brahmpura, who later told the media that it was a courtesy call.

He was seen talking with his party MP Aujla at the event. However, he maintained a distance from Majithia.

After resigning from the state cabinet on July 15, 2019, the former state Power Minister, Sidhu, was seen for the first time in public glare on November 9.

On that day he was among the first all-party delegation of 500 pilgrims from India that reached Pakistan's Kartarpur to pay obeisance at the shrine of Guru Nanak Dev, the founder of Sikhism, after the opening of the historic corridor between the two countries.

He had told the media on that occasion that he was meditating daily for 15 to 17 hours and had lost 25 kg.

"All my old clothes fit me," he had said jokingly.

Sidhu, who used to swear loyalty to Rahul Gandhi, had to exit from the government after differences with party veteran and Chief Minister Amarinder Singh.

Sidhu, who had been at loggerheads with Chief Minister Amarinder Singh, formally resigned on July 14. Since then he had limited his public appearances.

Speculations in political circles are rife that Sidhu may join the AAP ahead of the 2022 Assembly elections.

An indication in this regard has been given AAP MP Bhagwant Mann.

"Our party can talk to him (on the issue of his joining the party)," AAP state party chief Mann told the media last month, adding "We will welcome good politicians. But there is no official communication so far with him".

There are also speculations that political strategist Prashant Kishor, who has close proximity with both Arvind Kejriwal and Sidhu, could play a crucial role in bringing Sidhu to the AAP fold ahead of the state polls.

The beleaguered AAP is also looking for a CM face in Punjab.

Kishor was also instrumental in getting Sidhu to join the Congress ahead of the Punjab Assembly election in 2015.

At the same time, seeing the tone and tenor of Amarinder Singh's assertions, Sidhu's "rehabilitation" in political circles is not seen in the rulling dispensation.

In his latest development, with the Pakistan Railway Minister Sheikh Rashid's disclosure that Kartarpur Corridor was the brainchild of their Army Chief General Qamar Javed Bajwa, the Punjab Chief Minister ahd urged Sidhu to be more cautious in his dealings with the Imran Khan government.

He advised Sidhu not to allow his personal friendship with the Pakistan Prime Minister to cloud his judgement in any way, as that could be harmful for India's interests.

The Congress had won 77 seats in the 117-member state assembly in 2017 after projecting Amarinder Singh as its chief ministerial nominee, only one short of 78 figure required for a two-thirds majority.