After Kumbh, all eyes are on Char Dham yatra as Uttarakhand government ramps up COVID-19 measures 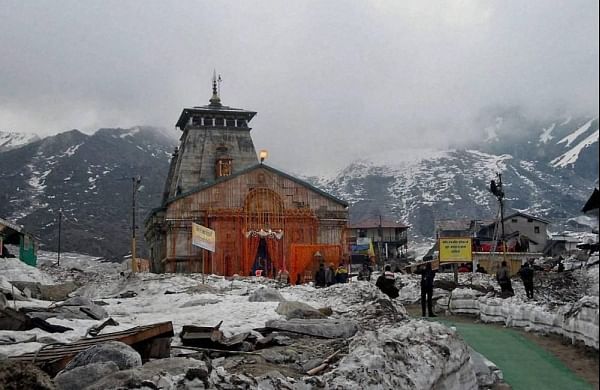 DEHRADUN: Fresh on the heels of the Mahakumbh, comes the Char Dham Yatra in Uttarakhand.

After reports of many Covid cases in Haridwar, the annual pilgrimage to the holy shrines of Kedarnath, Badrinath, Yamunotri and Gangotri will begin on May 14.

A cautious Uttarakhand government has made negative RT-PCR test reports mandatory, among other guidelines.

“We have made negative RT-PCR reports mandatory for Char Dham Yatra to ensure that the infection does not spread. The Yatra is a matter of faith and we are committed to provide every facility to the pilgrims from all over the world, “ said Uttarakhand’s Tourism Minister Satpal Maharaj.

Ravinath Raman, chairman of Char Dham Devsthanam Board, said the situation is assessed and an SOP is expected soon.

“We have pretty much decided to stick to the precautions taken last year. Guidelines will be released soon,” said the senior bureaucrat.

The SOP will include many conditions including registration and e-passes.

Entry to the sanctum sanctorum of the shrines will be prohibited, masks will be compulsory and so will be social distancing and the use of hand sanitizers.

Touching idols and offering flowers or sweets will not be allowed.

The Uttarakhand government is also likely to limit the number of pilgrims in a particular shrine on a day. Last year, it was 800 for Kedarnath shrine , 1,200 for Badrinath, 600 for Gangotri and 400 for Yamunotri.

Meanwhile, crowds at the ghats of Ganga in Haridwar have thinned down drastically after the key 'akhadas' of seers began pulling out of the Maha Kumbh, citing the surge in coronavirus numbers.

Many spots on Monday wore a deserted look, an unimaginable sight during the Haridwar kumbh mela which will formally close only on April 30.

Prime Minister Narendra Modi on Saturday had appealed to the sadhus to observe the remaining duration of the kumbh only in a "symbolic" manner.

There is hardly any crowd now at the bathing ghats where droves of sadhus and common devotees had gathered for a dip in the river on the 'shahi snan' of April 14, defying Covid-19 norms like social distancing.

Most of the devotees have already left and the akhadas have been winding up their camps one after another.

Panch Dashnam Joona Akhada, the largest among them, announced its exit from the kumbh mela soon after PM Modi's appeal to sadhus, referring to the rise in coronavirus cases.

Niranjani, Anand, Avahan, Agni and Kinnar sects too ended their participation in what is perhaps the largest religious congregation in the world.

"Most of the sanyasi akhadas have vacated their camps. Only 1,000-2,000 seers of the six Bairagi akhadas are still in the mela kshetra waiting for the last shahi snan slated for April 27," Uttarakhand DGP Ashok Kumar said.

"After the shahi snans of April 12 and 14 several akhadas left and not much is left in the Kumbh area. Practically, the kumbh kshetra is empty now and no one is expected to come from outside," he said.

Traditionally, the last shahi snan held on Ram Navami is a main event for the Bairagi sect and not for the others.

Altogether, Uttarakhand reported over 2,000 fresh Covid cases during the past four days with Dehradun and Haridwar districts being the largest contributors to the tally.

DGP Kumar, however, refused to accept the argument that the kumbh mela is a 'super-spreader' of the virus because of the huge gathering, calling the theory "entirely fake".

"We have data to prove that it is a complete lie," he claimed.

"The Covid positivity rate in Haridwar is less than two per cent. If 50 out of a total of 10,000 sadhus test positive for Covid, it is 0.5 per cent whereas three lakh people tested positive for Covid in Maharashtra in a span of five days," he added.

But Haridwar's Chief Medical Officer S K Jha said over 150 seers had tested positive for Covid from April 1 to 18.

Chief Minister Tirath Singh Rawat on Sunday said the shahi snan at the kumbh has been conducted successfully with everyone's cooperation.

The prime minister's appeal to seers has also evoked a positive response from the sadhus, he added.

Agni Akhada secretary Sampoornanand Brahmachari said the decision on a final kumbh immersion of deities was taken after Modi's appeal.

The state government on Monday said it is fully prepared to deal with the rising COVID-19 cases, and told the people there was no need to panic.

There are 18,864 COVID-19 patients in the state out of whom 13,500 are in home-isolation and around 5,000 are under treatment at different hospitals and Covid care centres, Secretary in-charge of Health Pankaj Pandey told a press conference.

Containment zones have been made in seven districts with the highest 44 in Dehradun, followed by 26 in Nainital, he said.

He also said there is no dearth of oxygen in the state as the three manufacturing plants in Dehradun, Roorkee and Kashipur are producing enough oxygen.

A total of 1,88,900 healthcare workers have been vaccinated in the state so far, out of which 1.79 lakh are frontline workers.

Over 15.95 lakh people have been inoculated in Uttarakhand so far, he said.

Claiming no paucity of vaccine, he said there are approximately 3 lakh doses available at present and the stock keeps getting replenished regularly.

However, the official admitted that there is a shortage of the drug Remdesivir in the state as elsewhere in the country, but the state government is in touch with manufacturers and has already placed the before them the volume of its requirements.

The official said there is no lack of preparedness to deal with any situation but appealed to people to comply with Covid appropriate-behaviour.

Uttarakhand reported 2,160 cases Monday with Dehradun district reporting the maximum 649 cases followed by Haridwar with 461, Nainital with 322, Udham Singh Nagar with 224, Tehri with 142 and Pauri with 114.

Twenty four others infected with the disease died.