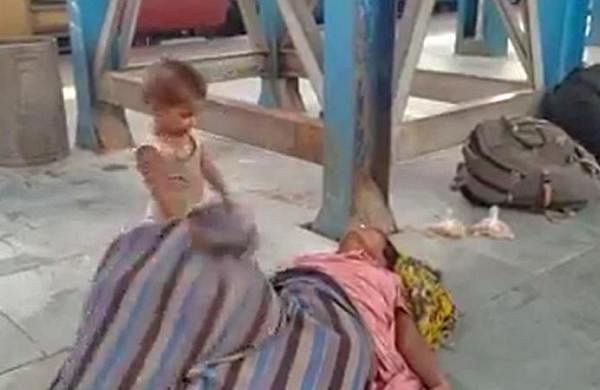 NEW DELHI: A lawyer has filed a complaint in the National Human Rights Commission (NHRC) regarding a video widely circulated on social media, wherein a woman died allegedly due to non-availability of food and basic facilities at Muzaffarpur Railway Station.

The video, which went viral recently, shows a body of a woman at Muzaffarpur Railway Station and a toddler tugging at the cloth that is partially covering the mother's body.

Complainant, Lawyer Badar Mahmood, has prayed that the CCTV footage of May 25 of particular railway platform at Muzaffarpur Railway Station may be seized, appropriate action must be taken against the "brutal, arbitrary and capricious behavior" of the Railways and Government of Bihar, and also appropriate compensation may be given to the family of the deceased woman.

Shramik special trains had been started by the Ministry of Railways for transportation of migrant laborers stranded in various parts of the country during COVID-19 lockdown.

The complaint alleged that the negligent act of Ministry of Railways and Government of Bihar in discharging their duty to ensure basic necessities in the train or the railway station and failed to protect the woman and her child.

The complaint further alleges that the deplorable state of affairs by the Ministry of Railways and Government of Bihar in failing to provide the basic necessities of food and health is "shocking and gross abuse of her Human Rights".

The Constitution of India in Article 21 guarantees "right to life and personal dignity" to every citizen of India and also Directive Principles constitute that the state shall try to promote the welfare of people by providing them basic facilities to every citizen of the country, the complaint stated.