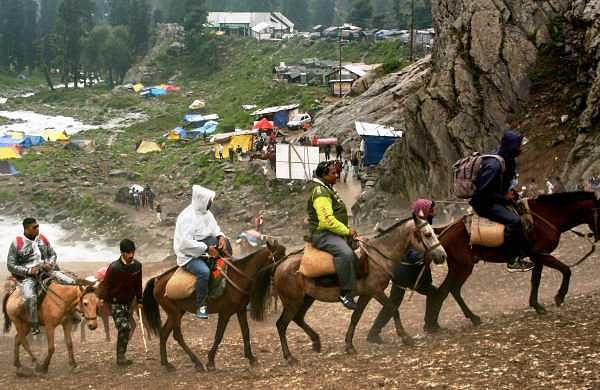 SRINAGAR: For the second consecutive year, the annual Amarnath yatra has been cancelled due to the Covid-19 pandemic.

“However, all the traditional religious rituals shall be performed at the cave shrine in south Kashmir Himalayas as per the past practice,” an official spokesman said.

The shrine board has put in place a virtual and televised mechanism for live Darshan of Aarti from the shrine.

“The devotees should be enabled to attend the morning and evening Aarti in online mode. It would help them to pay their obeisance while also avoiding travel and exposure,” the spokesman said.

Lt Governor Manoj Sinha said it is important to save the lives of people.

“So, it is not advisable to hold and conduct this year's pilgrimage in the larger public interest. Amarnathji Shrine Board is aware of and respects the sentiments of millions of devotees, and to keep the sentiments alive, the Board shall continue the live telecast of morning and evening Aarti from the Cave shrine," he said.

The 56-day pilgrimage was scheduled to start from June 28 and conclude on Raksha Bandhan on August 22.

The government was expecting 6 lakh yatris to visit the Amarnath shrine this year.

After the outbreak of the Covid pandemic in 2019, the Amarnath yatra was cancelled in 2020. The yatra was also curtailed and called off mid-way in 2019 ahead of abrogation of Article 370 and bifurcation of J&K state on August 5, 2019.