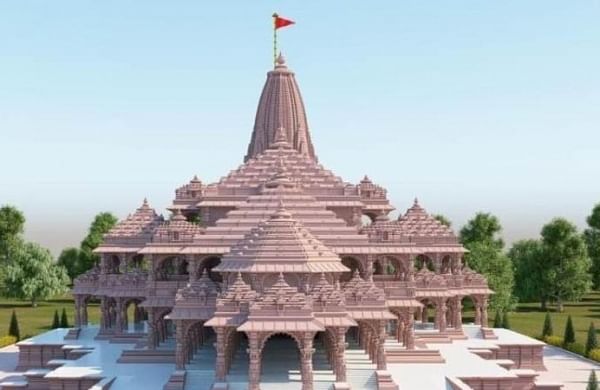 AYODHYA: Amid criticism from opposition parties over the alleged irregularity in the purchase of land at Ayodhya by Shri Ram Janmbhoomi Teerth Kshetra Trust, the trust on Tuesday took to its official Twitter handle to post facts about the land purchase deal conducted by it in Bagh Bijaisi, Ayodhya.

In a statement issued by the Trust which it shared via its Twitter handle, it stated that the land situated in Bag Bijaisi in Ayodhya nearby Railway station, is adjacent to a road, which in the very near future will be four lane and serve as the main approach road to Ram Janm Bhoomi Mandir, due to which the location of the land is very much prime.

It stated that the 1.2080 hectare land was purchased at the rate of Rs 1423 per Square Feet, which is much less than the actual market rate in Ayodhya. For the same land, agreements were made between different parties at many times starting since 2011 but due to some reasons they never matured, it said.

Giving details of the agreements the Trust said that a person named Nyas was interested to purchase this land but wanted first to finalise all the previous agreements so that ownership of the land may be cleared. About nine individuals are involved in this deal over the last 10 years and out of these nine, 3 are Muslims, the Trust said.

It stated that all the individuals were contacted and on receiving their consent, they all came and sat together to decide on their previous agreements. As and when the previous agreements finalised, the trust made the agreement with final owners of the land with immediate effect without losing any time, said the Trust adding, the deal was conducted quickly but in transparent manner.

The Trust stated that all the financial dealings will be through banking channels (i.e online mode and no cheque no cash).

"Secondly, we have already purchased three to four plots including Mandirs, Ashrams and in future also we will do it," it said.

The Trust further stated that it has been decided that for each and every purchased temple/ashram/private property a piece of land of their own choice to be provided for rehabilitation and sufficient funds to be given for constructing their buildings, adding that everything is on record.

It stated that on November 20, 2017 Mehfooz Alam and three other above mentioned persons registered a sale deed to Kusum Pathak and her husband Harish Pathak (same 4 gata numbers, total land 2.334 hectare) on a consideration amount of Rs 2 crore.

"On 21/11/2017 Kusum Pathak and Harish Pathak entered into an agreement to sell above 4 gatas to lchchha Ram Singh, Jitendra Kumar Singh and Rakesh Kumar Singh. Consideration amount was Rs. 2.16 crore," said the Trust.

It further stated that on September 17, 2019, the agreement was cancelled and on the same date another agreement was entered upon by Kusum Pathak and Harish Pathak to sell above mentioned land to Ichchha Ram Singh, Vishwa Pratap Upadhyay, Manish Kumar, Subedar, Balram Yadav, Ravindra Kumar Dubey, Sultan Ansari and Rashid Hussain. The amount of consideration was Rs 2 crore and validity of agreement was 3 years, it said.

It stated that on the same day, Ravi Mohan Tiwari and Sultan Ansari entered into an agreement to sell this land to RJB Trust, adding that the consideration amount agreed was Rs 18.50 crore.

Payment of Rs 17 crores was made as advance by online transaction, it added.