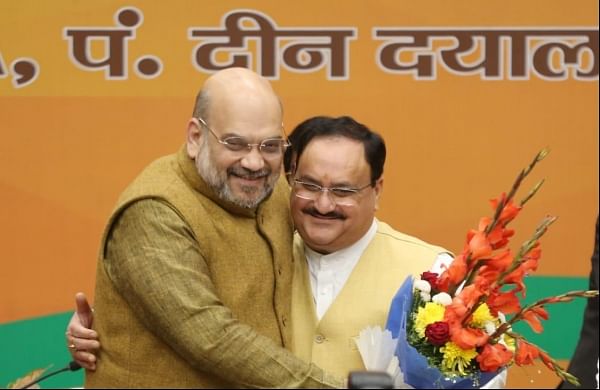 NEW DELHI: On Monday, as the curtains finally came down on the five-and-a-half-year tenure of Amit Shah as BJP president, the party headquarters sported a large banner with pictures of Prime Minister Narendra Modi and Shah beaming in one corner and former PM Atal Bihari Vajpayee and party patriarch
L K Advani in another frame at the right corner.

The banner summed up BJP’s two eventful phases, one in 1990s and another post-2014, when the party took significant electoral flights to dominate Indian politics.

If Advani gave wings to the BJP to soar high riding the politics of Hindutva, with Vajpayee to manoeuver coalition politics, Shah rode Modi’s developmental credentials to turn the party into electoral war machinery, counting state after state in party’s kitty.

At the peak of Shah’s success as BJP chief, the party ruled in 19 states, with 17 chief ministers from its ranks. As he passed the baton to J P Nadda, the BJP has 11 CMs from its ranks, besides ruling Bihar with the ally JD(U).

Shah, in the early part of his political career, served as the booth manager for the Lok Sabha elections of Advani from Gandhinagar in Gujarat.

In the course of 66 months as the BJP chief, he has etched his name as the most successful president of the saffron party, with only Advani behind him.

Founded in 1980, the BJP wrested power in 1998 at the Centre for the first time, with the Vajpayee-Advani duo making the most of people’s appetite for the politics of Hindutva.

Exactly a decade after Vajpayee was stunned in 2004 Lok Sabha polls, the Modi-Shah duo shone on the horizon catapulting the BJP to power with a majority in the Lok Sabha.

If Advani rode high on emotional quotient, Shah worked with the organisation to cut through the caste maze to script a social engineering to fuel the unprecedented rise of the BJP.

The 2019 election victory with 303 seats, which powered the return of the Modi government for another term, will by all accounts be counted as the most significant achievement of Shah.