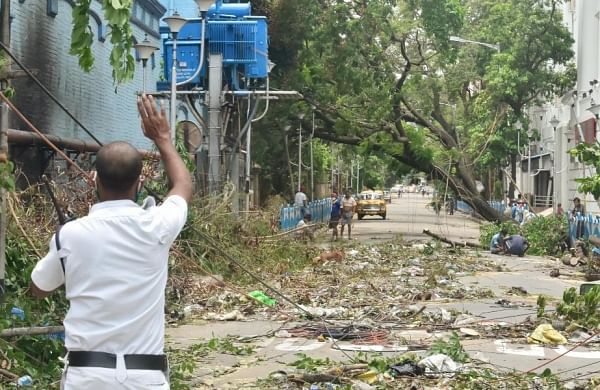 KOLKARA: The wind swooshed like it was possessed, trees fell like ninepins and rain seeped through walls of warehouses and shops, soaking thousands of books and endangering a priceless piece of Kolkata heritage - its famed College Street.

The night of May 20, when Cyclone Amphan unleashed its wrath, could well have written the epitaph of College Street, a 1.5 km street with about 1,500 stores that fell silent with the lockdown on March 25 and was anyway fighting for survival in an era of e-books and Kindle.

Almost two weeks later, the signs of the damage are still there, said S K Hyder Ali, one of the hundreds of shop owners struggling to salvage what he can.

He watched the cyclone horror unfold from a dark corner of his house in his village in Hooghly district close to Kolkata. He could reach College Street only four days later, wading through knee-deep water with books floating like corpses to access his stall.

"I saw trees getting uprooted and everything around flying in the air, but I thought the destruction was worse in village areas. I never imagined cities could be hit so bad. I could barely make my way to the shop, which was completely flooded.

Almost all my books are damaged and not in a condition to be sold," the 40-year-old told PTI.

Ali's 45-year-old shop, once run by his father, now stands in ruins along with many other shops in the iconic book market, locally known as 'boi para' (the neighbourhood of books).

The Publishers and Booksellers Guild has estimated that the damage suffered by the market is likely to run into crores of rupees.

Many booksellers said the market was barely surviving even before the lockdown.

A major setback was, of course, the rise of the online book market that rendered trips to the brick and mortar shops futile. This, in turn, was made worse by the arrival of online reading on phones, tablets and kindles.

Avishek Biswas, whose bookstore Prapti, selling literature for competitive examinations, was yielding almost no income, said Amphan was merely the proverbial final nail in the coffin.

The 38-year-old said he was forced to branch into the restaurant business a few years back.

"I was practically earning nothing from the bookshop. There was no profit. In fact, we have had to sell books at prices lower than what we bought them for. So I eventually opened a restaurant to bring home a little more money.

But even that has been closed for the last two months," Biswas told PTI.

His shop behind the famous Kolkata Coffee House incurred an estimated loss of at least Rs 1 lakh in the cyclone.

Books not just in the shop but also in the warehouse at the back got wet and soiled.

"One would think the warehouse would remain protected. But there was so much water that it seeped into the walls and destroyed the books," he said.

An integral part of Kolkata's character, College Street is believed to have gotten its name from Hindu College (now Presidency University), established by David Hare in 1817.

Over the years, the area became home to several other educational institutes, including the Calcutta University, Sanskrit College and Calcutta Medical College.

"I don't think there is anywhere else in the world quite like it. The only counterpart to this kind of a book market is the one by the Seine river in Paris where you have lines of small stalls which are much like the college street book stalls that get locked up at night and reopened every morning," writer Amit Chaudhuri told PTI.

The author of books such as 'Calcutta: Two Years in the City' and 'Afternoon Raag' described the College Street book market as one of a kind and a 'cultural inheritance' for not just Calcuttans but also the rest of the country.

With a seemingly inexhaustible stock of books in all subjects and genres, College Street has long been the go-to place for the intellectually curious.

Students lazily browsing through books, striking up conversations with shopkeepers, or aggressively bargaining over precious first editions were familiar sights at the market, a favourite backdrop for Bengali filmmakers and one that has frequently featured in Bengali and English literature.

Recalling the history of the place, Delhi University professor Saswati Sengupta said, "The Hindu College shifted from Garanhata Street to Pataldanga next to a pond known as Goldighi in 1825, and it set in motion subsequent developments that transformed the pond and the street adjoining it as Calcutta's College Square and College Street."

Sengupta, who frequented the area in the 1980s following a new found interest in medieval Bengali literature, said she stumbled on several "gems" at this market, but also remembered booksellers complaining about the increased demand for "guide books".

"It was a bustling location where the booksellers still had time to chat with a young researcher about her project.

I have not only been guided to books, stores and kiosks by them but also offered time and space to just sit and browse even if I didn't buy any books."

Kajal Mukherjee, owner of Ekushe, a bookstore that primarily sells books on social sciences, agreed that selling books in College Street had stopped being a profitable business long before the cyclone or even the lockdown hit the market.

"There was a time when students would come looking for books by big authors, foreign authors and we would have to get them specially ordered.

But, now all they ask for are guide books," he said.

Chaudhuri, however, chooses to remain optimistic and said the cyclone has redirected the country's attention to a market which was otherwise perishing in neglect.

"What happened with the cyclone is an opportunity for us to reconsider this place. It brings it back to our attention the importance of this street and of those stalls.

Maybe one would rather not have had the attention come back in this particular way, but it's an important inheritance, and it's for us to follow up on it to keep it going.

"This might be a moment in which one actually gives them sort of a renewed lease of life," Chaudhuri said.

As part of the first few steps towards rebuilding the College Street 'boi para', the Publishers and Booksellers Guild has opened a new account seeking donations to help provide relief to the publishers and booksellers who were affected by the cyclone.