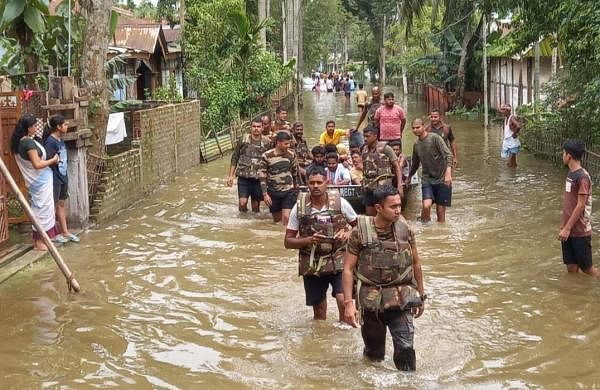 GUWAHATI: Captain Rupam Das is an example of service before self. Even as the members of his family are battling the devastating Assam floods and stranded at home, the young Assamese Army officer saved over a hundred lives. He hails from Pathshala in the state.

"His action is an exceptional example of selfless service to humanity and the nation. Such inspiring acts manifest exceptional human values and strong military grooming and displays the foundational qualities of the youth of the nation," the statement added.

The Army had joined the Assam flood rescue operations four days ago. Fourteen composite columns rescued over 4,500 people, including patients, elderly people and children, in seven districts. Meanwhile, the flood situation in the state remained unchanged.

Eight more persons died - five in floods and three in landslides – on Sunday which took the death toll to 70. Over 37.17 lakh people in 30 of the state’s 35 districts have been affected.

The Northeast Frontier Railway cancelled a number of trains after the floodwaters inundated tracks at some places. The Kaziranga National Park was also partially submerged. A total of 44 of its 223 camps were under water, official sources said.

In Dibrugarh of upper Assam, four persons were reported missing on Sunday after a country boat capsized on the flooded Brahmaputra. There were altogether nine persons and the five others managed to swim to safety.

Apart from Assam, Meghalaya has been badly affected by floods and landslides.