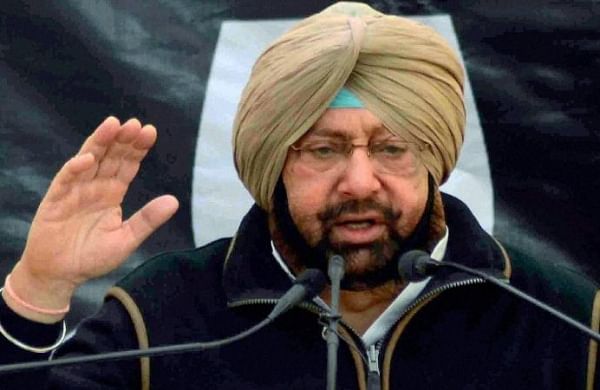 CHANDIGARH: Punjab Lok Congress leader Amarinder Singh on Friday launched a scathing attack against Chief Minister Charanjit Singh Channi, alleging that the road blockade that led to the PM's security breach was "stage-managed" and kickbacks were received in the transfer and posting of officers.

The incumbent government has been exposed as a "suitcase di sarkar" after the recent ED raids that unearthed crores of rupees from the chief minister's kin, he said in a statement.

Amarinder Singh also claimed that Channi had once "fallen on his feet", imploring to get rid of a harassment complaint by a woman officer.

The prime minister's convoy was stranded on a flyover due to a blockade by protesters in Ferozepur earlier this month, after which he returned from the poll-bound state without attending the rally there.

The former Punjab CM alleged that the Channi government had "instructed police not to remove farmers who were stopping BJP buses" from reaching the Ferozepur rally venue.

Amarinder Singh said he had earlier passed the flyover near Ferozepur and there was no blockade there.

The PM's security breach was "clearly stage-managed" by the Channi government, the leader said in a statement.

Describing the incident a major security lapse, the former CM said instead of taking a defiant stand, Channi should have issued an unequivocal apology.

"We are sensitive border state and Pakistan's ISI is always looking to create trouble here," he said, asserting that one cannot ever take any chances.

Amarinder Singh regretted having helped "Channi resolve the #metoo complaint against him", saying the then minister had "fallen on his feet and pledged loyalty to him for life".

"Now, he has changed colours and claiming he had been trying to get rid of me for the past two years!," he said. Dubbing Channi as an "unreliable and untrustworthy person", Amarinder Singh alleged that Channi made transfers and postings an industry in Punjab in the past three months.

"Three DGPs have been changed, his home minister has been openly accused in a cabinet meeting by his colleague that money was being taken for posting of SSP, there was a tug of war on the AG's post"This is not 'lokaan di sarkar' (people's government) but 'transfer posting di sarkar', which has now also become 'suitcase di sarkar'," he added.

The former CM said the Enforcement Directorate seizure from a Channi's kin was a follow-up on the case that the agency had registered after he (as CM) had ordered an inquiry while he was heading the government.

Unfortunately, he said he had been unable to take any serious action against the Congress MLAs "who were involved in illegal mining in the state as that would have damaged the party's interests and Sonia Gandhi had failed to respond to his query on which minister or MLA she wanted him to sack over the issue".

Labeling Channi a total failure, Amarinder Singh said the new chief minister had done nothing except indulge in postings and transfers since taking over.

"Even the announcements made by Channi are nothing but projects that were launched or announced by me," he said, citing farm loan waiver, jobs under the Ghar-Ghar Rozgar scheme and free bus travel for women.

"Even free power which he claims to be his initiative was something my government was working on finding ways and means to implement," he added.

Amarinder Singh alleged that Manpreet Badal as finance minister had scuttled many of his schemes and plans by claiming to have no funds, which it appears now was a total lie.

On why no sitting Congress MLA was joining his party, Amarinder Singh said they are only waiting for their party to announce tickets, "which is being deliberately delayed as the Congress is scared of defections".