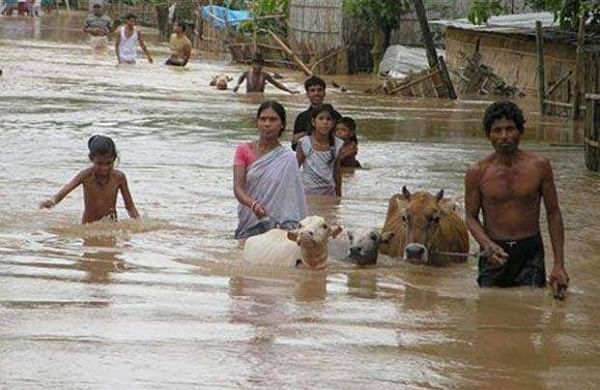 GUWAHATI: Four more persons died in the flood and landslides triggered by torrential rains in Assam on Sunday.

While two people died in the flood in Nagaon district, as many others were killed in an incident of landslide at Jorabat on the outskirts of Guwahati in Kamrup (Metro) district. With these, the death toll rose to 70 – 44 in flood and 26 in landslides.

According to Assam State Disaster Management Authority, over 12.97 lakh people are affected in 2,015 villages and localities across 24 of the state’s 33 districts. Standing crop affected was in areas of 82,546 hectares.

The floodwater breached river embankments and damaged bridges and roads in some districts. Almost all major rivers such as Brahmaputra, Burhi Dehing, Dhansiri, Jia Bharali, Puthimari, Beki, Kopili and Sankosh were in a spate. The Brahmaputra was flowing above two feet of the danger level at several places.

At the flooded Kaziranga National Park, 41 animals died so far due to various reasons including drowning and vehicle hits. The animals included one rhino, one wild buffalo, one swamp deer, three wild boars and 35 hog deer. The incidents of vehicle hits occurred on a national highway that passes beside the park.

After taking stock of the situation at a meeting on Sunday, Chief Minister Sarbananda Sonowal instructed the Ministers, MPs and MLAs to visit the affected areas and assess the damage. He also directed that embankments, damaged by the flood, be repaired on a war-footing.

In neighbouring Arunachal Pradesh, the deluge inundated low-lying areas of Pasighat, Namsai and Dibang towns while landslides snapped communication in several parts of the state. Two days ago, eight people were killed in two incidents of landslides in Papum Pare district. Official sources said rivers such as Siang, Dikrong, Dibang and Subansiri were flowing above the danger level.