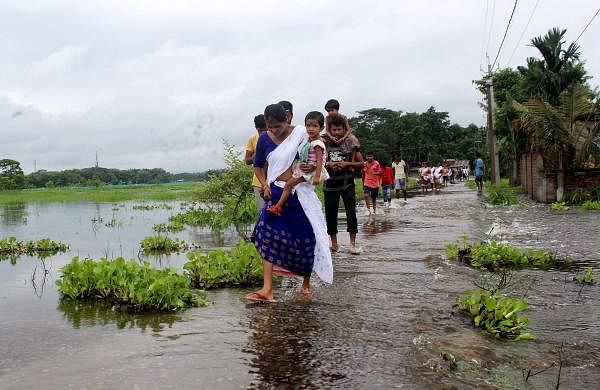 GUWAHATI: Nine persons perished in the flood in Assam on Tuesday as the overall situation continued to remain grim.

The deaths were reported from Biswanath (one), Barpeta (two), Golaghat (one), Dibrugarh (three) and Tinsukia (two) districts. With these, the death toll rose to 59. Twenty-six others were killed in landslides earlier.

According to Assam State Disaster Management Authority, altogether 32,94,127 people are affected in 3,371 villages and localities across 28 of the state’s 33 districts. The standing crop was affected in areas of 1,28,495 hectares.

The floodwater breached a number of river embankments and damaged several bridges and roads across the state. All major rivers such as Brahmaputra, Dhansiri, Burhi Dehing, Jia Bharali, Puthimari, Beki, Kopili, Sankosh, Subansiri, Pagladiya, Katakhal and Kushiyara were in a spate, flowing above the danger level.

A video journalist of a local news channel was injured after he was attacked by a rhino which had strayed out of the flooded Kaziranga National Park.

The incident occurred at the Hatikhuli Tea Estate when Baskar Rajkhowa was filming the animal. On seeing him, the rhino charged at him, leaving him seriously injured. He was rushed to a hospital.

The entire park, which is a UNESCO World Heritage Site famous for its one-horned rhinos, is under water. Till Monday, 51 animals died due to various reasons including drowning and vehicle hits. The animals included one rhino, one wild buffalo, one swamp deer, three wild boars and 45 hog deer. The incidents of vehicle hits occurred on a national highway that passes beside the park.

“You can say the entire park is under water. A whole lot of animals, mostly elephants and deer, have moved to the neighbouring hills in Karbi Anglong,” the park’s director P Sivakumar told this newspaper.

“The Chief Minister stressed on the need to dredge the Brahmaputra as its water-carrying capacity has reduced over the years due to loss of depth. He said the Water Resources Department would soon start dredging work. He opined that strengthening of river management in neighbouring states would help in preventing floods effectively in Assam,” an official statement said.