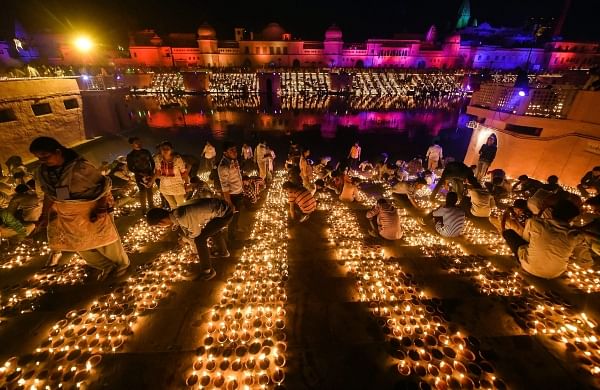 LUCKNOW: For the first time, 500 drones will draw the Ramayan era scenes on Ayodhya’s skyline during the Deepotsav celebrations on Diwali eve in the temple town of Ayodhya in November.

The Deepotsav lightening 7.5 lakh diyas (earthen lamps) on the Diwali eve on November 3 will be the centerpiece of the six-day celebrations starting on November 1 in Ayodhya.

Apart from the drones, the other attractions will be a 3-D holographic show, 3-D projection mapping, and laser show at the majestic Ram Ki Paidi on the banks of the Saryu River.

Senior state government officials including principal secretary, Tourism, Mukesh Meshram, was in Ayodhya on Thursday to review preparations for Deepotsav.

The Ayodhya administration has set a target of lighting a minimum of 7.5 lakh diyas (earthen lamps) across Ayodhya registering another Gunniess record, this year. Most of them will be lit at Ram Ki Paidi, the venue of the main event.

A team from the Guinness Book of World Records will be in Ayodhya to judge the event. Around 12,000 volunteers, mostly students of Ram Manohar Lohia Awadh University, Ayodhya, have been engaged in making the lighting of the diyas successful.

The Yogi Adityanath government has initiated the celebration called Deepotsav in Ayodhya every year on the eve of Diwali since 2017. This Deepotsav will be the last one before the Uttar Pradesh assembly elections due early next year.