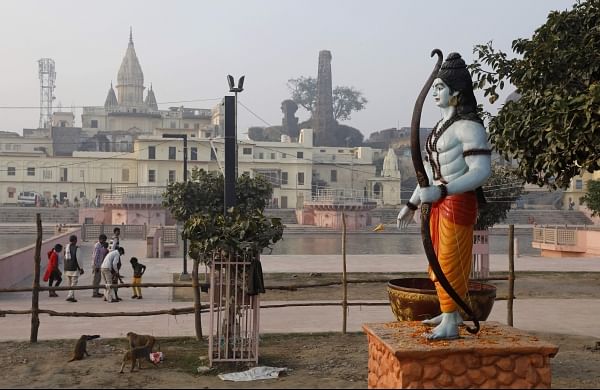 LUCKNOW: The Muslim side seems to be a divided house Over the decision of All India Muslim Personal Law Board (AIMPLB) to file a review petition over Supreme Court’s November 9 verdict on Ayodhya title suit.

While the board has claimed support of litigants, Mufti Badshah Khan, Mohammad Khaliq, nominee of a litigant Maulana Mehfooz-ur-Rehman and Mohammad Umer, the Aligarh Muslim  University student union (AMUSU) too came out to back AIMPLB’s decision of going for the review of SC order.

Justifying their decision, Mufti Badshah Khan said it was his legal right to seek review if he was not content with the court’s verdict. Mohammad Khaliq said he would seek a review of the clause that land should be given for a mosque elsewhere. Mohammad Umar said that the verdict had many loopholes, so a review was justified.

Meanwhile, the AMUSU claimed that review was the only remedy to settle the issue. The office-bearers of the student union, the tenure of which has already ended, extended their gratitude to AIMPLB for deciding to seek review of the order. “We reject the land offer given to one of the Muslim plaintiffs. Indian Muslims have no scarcity of land; we are in search of dignity,” they said.

On the contrary, Iqbal Ansari, son, and representative of the main title suit litigant late Hashim Ansari of Ayodhya and UP Sunni Central Waqf Board (UPSCWB) opposed the AIMPLB’s decision of filing a review petition.

“I am not concerned about anyone filing a review petition, I am firm on not going for it. I am Indian Muslim and I follow the constitution of this country,” said Iqbal Ansari while talking to TNIE.

However, after his statement, AIMPLB member Zafaryab Jilani claimed that Ansari must be under some pressure.

Similarly, the other main litigant UPSCWB chief Zufar Faruqi said that the board’s decision would not deter him from his earlier well-stated stance. “AIMPLB is free to go ahead with a review petition. But we will not file one. The decision on accepting the alternative 5-acre land for mosque will be taken at our meeting on November 26,” he said.

Prominent Shia cleric and vice-president of AIMPLB Kalbe Saddiq boycotted the board’s Sunday meeting as he was opposed to the idea of seeking a review of SC verdict.

The AIMPLB has also drawn criticism from Maulana Shahbuddin Rajvi, general secretary, Tazeem Ulema-e Islam of Bareilly. The Maulana said that now politics was being played on the apex court verdict.

“The AIMPLB wants to keep Ayodhya issue alive by driving Hindus and Muslims,” he said. The Maulana claimed that the board represented only 25 percent of the country’s Muslims and 75 percent hardly believed in it.

It will be judicious to leave this issue here and move on. The new generation of Muslims should not be pushed into this trouble as we don’t want hatred in the country anymore,” he said.