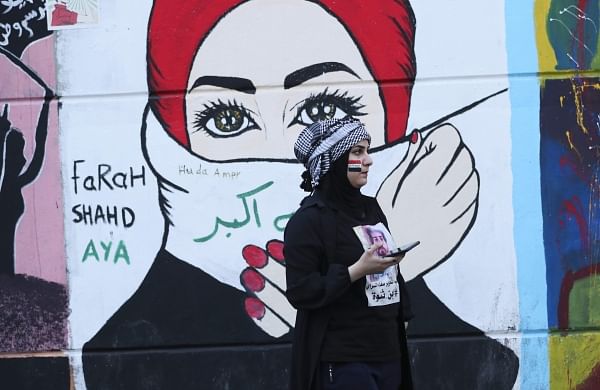 BAGHDAD: The images are both haunting and inspiring, transforming a once dreary, grim underpass into a vivid, colourful wall of art. "We want a nation, not a prison," says one painting that depicts a man bursting free from behind bars.

"Plant a revolution, and you will harvest a nation," reads another showing a hand flashing the victory sign over protesters heads.

Some of the messages are less sentimental. "Look at us, Americans, this is all your fault," declares one. The Saadoun Tunnel has become an ad hoc museum for Iraq's massive anti-government protest movement.

Along its walls, young artists draw murals, portraits and graffiti that illustrate the country's tortured past and the Iraq they aspire to. The tunnel passes under Baghdad's Tahrir Square, the epicentre of the protests where thousands of people are camped out in a giant sit-in that has taken on the feel of a vibrant mini-city.

Almost daily, clashes erupt with security forces not far away firing tear gas, live rounds and stun grenades to prevent protesters from crossing bridges over the Tigris River to the Green Zone, the seat of Iraq's government.

Tuk-tuks "three-wheeled motorcycle transports" often zip back and forth through the Saadoun Tunnel, rushing wounded protesters from the front lines to medical clinics.

Saadoun Tunnel, the tuk-tuks, the square and a nearby 14-story Saddam Hussein-era building on the Tigris that protesters took over have all become symbols of what has become the largest grassroots protest movement Iraq has seen.

The protests erupted Oct.1 over longstanding grievances at corruption, unemployment and a lack of basic services and quickly escalated into calls to sweep aside Iraq's sectarian system imposed after the 2003 U.S. invasion and its entire political elite.

Young protesters, men and women, throng the tunnel "actually a long underpass, most of which is open to the air except for enclosed portions directly beneath Tahrir" and pass time there hanging out or taking selfies in front of the murals.

Caricatures on the walls mock Iraqi politicians; other paintings praise the tuk-tuks; a woman with an Iraqi flag on her cheek flexes her bicep, recreating the famed US.

"We Can Do It" poster; faces in drawings shout in anger or pain. Haydar Mohammed said he and a group of other medical students were partly responsible for the murals.

They met in Tahrir and saw the walls of the tunnel were a perfect medium to send a message to those who are suspicious of the protesters, he said.

"We are life-makers, not death-makers," he said. "We decided to draw simple paintings to support our protester brothers and to express our message, which is a peace message."

Many of the murals carry calls for anti-sectarianism, peace and a free Iraq.

In one painting, a little girl cries, declaring "They killed my dream," referring to the group of men behind her, some in religious clothes. Another shows an Iraqi protester wearing a helmet against tear gas with the Arabic words: "In the heart is something that cannot be killed by guns, which is the nation."

Nearby is scrawled, in English, "All That I want is life." "Sitting in front of these portraits, people and candles are better than being in any coffeeshop.

Every time I look at them I am hopeful that the revolution will not end," said Yahya Mohammed, 32, smoking a hookah in the tunnel and observing the scene.

"This tunnel gives me hope."