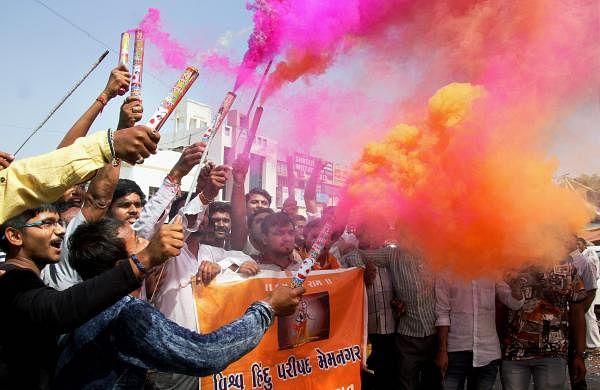 NEW DELHI: After the massive Tableeghi Jamaat congregation in Delhi's Nizamuddin has proved to be a super spreader of coronavirus, the VHP on Sunday demanded that the organisation be banned, and even alleged that it has terror links.

It alleged that "after being indoctrinated from its Nizamuddin headquarters, hundreds of thousands of Tableeghis are spreading obscurantism, wickedness, and terrorism all over the world. Most of the founders of the world's terrorist organizations have also been associated with the Tableeghi Jamaat."

It also demanded that the Nizamuddin Markaz buildings and its bank accounts are sealed forthwith and their financial sources are discovered.

That's not all. The VHP asked for departmental proceedings against the "guilty officers concerned" who allowed this congregation to take place.

The entire country is "stunned and disgusted with this inhuman behavior of the Tableeghis and the radicals indoctrinated by them", the VHP alleged while adding that the Tabhleeghi Jamat is "using the COVID-19 as a weapon".

"The whole of India is in serious crisis today due to the country-wide criminal misdeeds of the Tablighi Jamaat and its Nizamuddin Markaz."

VHP's Central Joint General Secretary Dr. Surendra Jain said that the financial sources of the Tablighi Jamaat, that is endangering the lives of all Indians, should be probed and their bank accounts, offices and activities stopped at once.

"After the hard work and achievements of the 8-day pan-India lockdown, the whole country was taking a sigh of relief. The growth rate of corona victims was just 2.8 percent. Just then, on March 30, a terrible corona explosion took place in the Nizamuddin Markaz."

He also claimed that Indigenous and foreign corona-infected clerics hiding in mosque and madrasas sparked off the possibilities of community transmission of the fatal virus increased.

Jain credited the VHP for stopping another such congregation on March 14-15. The VHP also cited misbehavior by sections of quarantined Jamaat members.

"The doctors, who went to save the lives of the corona clerics, were attacked. The quarantined Tablighis started doing obscene acts before the nurses and spitting on the doctors," he said, adding that army doctors had to be called into the quarantine center at Narela.

"Not only in Nizamuddin, but the clerics across the country delivered speeches to inflame the Muslim community," he alleged.