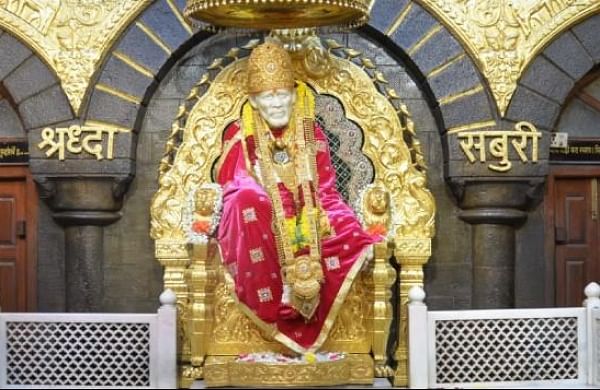 MUMBAI: Shirdi town witnessed a shutdown, Sunday, in protest against Maharashtra Chief Minister Uddhav Thackeray’s alleged attempt to ‘create a dispute’ over the birthplace of Saibaba by announcing that Pathri was his actual birthplace.

The government also announced a grant of Rs 100 crore to develop Pathri as a religious tourism site. In view of the meeting called by Chief Minister Uddhav Thackeray in Mumbai, residents of Shirdi called off the bandh from Sunday midnight but anger still prevailed among them.

Known for its temple, Shirdi town with a population of around 37,000, plus around two dozen villages observed a total bandh.

All shops and commercial establishments, hotels and restaurants, remained shut on the first day of the bandh. On Sunday morning, a rally was taken out by devotees of Saibaba and locals around the Shirdi temple.

It was only late in the evening that the Shirdi residents decided to call off the bandh from Sunday midnight, but not before warning to launch a bigger protest if a meeting with the CM fails to bring any satisfactory solution.

A former trustee of the temple, Kailash Kote, said that if the outcome of the CM’s meeting is not satisfactory, then the residents of Shirdi will protest aggressively.

“About 500 locals were present at the gram sabha,” he said. Maharashtra minister Chhagan Bhujbal confirmed that the shutdown had hit the temple town while calling for peaceful resolution of the row over Saibaba’s actual birthplace.

“When I enquired about today’s footfall of devotees at Shirdi, I came to know that it dropped by 10,000. I also got to know that people canceled their bookings at hotels in the temple town,” the Food and Civil Supplies Minister said adding, “Such bandhs and protests are not good for the temple town.”

The former chief minister and minister in Maharashtra Vikas Aghadi Ashok Chavan said that it is fact that Saibaba was born in Pathri and they welcome the decision of the Chief Minister. A BJP led trust controls affairs of Shirdi, which falls in Ahmednagar, 120 kms from Pathri, situated in Parbhani district of Marathwada.

“The CM has been misguided by petty politicians. A research book created this trouble by identifying Pathri as Sai’s birthplace,” BJP MLA  Radhakrishna Vikhe Patil, said.

“The Chief Minister should withdraw his statement and base himself on history. Saibaba in his Saicharitra never mentioned his birthplace or religion,” he added.

Shirdi residents say, Saibaba did not believe any religion, therefore, all caste, creed and religion devote flocked to Shirdi where he resided 80 years. They also say Hari Dixit, the close aide of Sai Baba in his handwritten book never referred to Pathri but attested to his death by Samadhi at Shirdi.

On the other hand, Pathri villagers say Sai Baba was born there and the eighth Sai Charitra, mentioning his birth, has been missing from the temple. The Charitra has been published 35 times.

In 1975, the trustee of Pathri Saijanmasthan (birthplace) Vishwasrao Kher had claimed Sai Baba was born in Pathri. Kher’s father Balasaheb Kher was the first CM of united Maharashtra.

NCP leader Durani Abdullah Khan said that they have formed the Saibaba birthplace action committee and they will meet the CM and submit all proofs to Uddhav.

After a meeting with locals, Shiv Sena MP Sadashiv Lokhande said the bandh will be called off after midnight.

“CM Uddhav Thackeray has convened a meeting in Mumbai on Monday to discuss it,” he said.

Despite the bandh, the  Saibaba temple remained open throughout the day with no report of devotees facing any inconvenience.

A former member of the Shri Saibaba Sansthan Trust said residents of Shirdi provided food and water for the devotees visiting the shrine.

He said the bandh will continue until the CM withdraws his statement.

Will Shirdi lose its importance?

There is a fear that if Pathri is developed, the importance of Shirdi will fade. Followers of Sai Baba flock to Shirdi where there is a shrine for the saint.  In 2019, the temple received donations worth `287 crores, up from Rs 285 crore of the previous year.

Grand celebrations were held in 2018 to observe the centenary year of the samadhi of Sai Baba. President Ram Nath Kovind and Prime Minister Narendra Modi were among the list of dignitaries who attended the celebrations.

What was the trigger?

Maharashtra CM Uddhav Thackeray had visited Pathri, termed it the 'birthplace' of Saibaba and announced a Rs 100 crore grant to develop the temple and surrounding areas on the lines of Shirdi

Shirdi residents say as Saibaba did not believe any religion, all caste, creed and religion devotes flocked to Shirdi where he resided 80 years. They also say Sai Baba’s aide Hari Dixit, in his handwritten book, never referred to Pathri but attested to his death by Samadhi at Shirdi.

Pathri villagers say Sai Baba was born there and the eighth Sai Charitra, mentioning his birth, has been missing from the temple. The Charitra has been published 35 times.

"The CM has been misguided by petty politicians. A research book created this trouble by identifying Pathri as Sai’s birthplace. The CM should withdraw his statement and base himself on history
Radhakrishna Vikhe Patil," BJP MLA.

"I am a Sai devotee first and an MP later. I support this protest. Saibaba came to Shirdi when he was 16. He never revealed his caste or religion, so he should not be divided. I am going to speak to the chief minister about the issue," Sadashiv Lokhande, Shiv Sena MP.

"There was no such dispute until now. Why has the claim that Pathri is Saibaba's birthplace comes up only after the new government has taken over? The people of Shirdi may resort to legal action,"
Sujay Vikhe-Patil, BJP MP

"Pathri is Saibaba's ‘janmabhoomi’ while Shirdi is his ‘karmabhoomi’. Both the places have equal significance for all his devotees," Durrani Abdullah Khan, NCP leader

(THE NEW INDIAN EXPRESS)
167 Days ago