Barber shops, salons open and then shut again in Lucknow 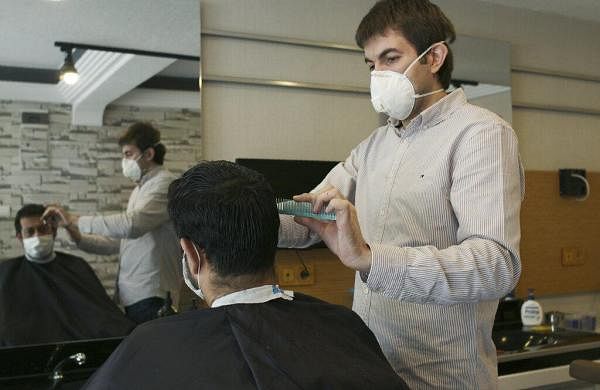 LUCKNOW: Barber shops and salons that opened here on Friday after a wait of almost two months, are now shutting shop again.

The Salons and barber shops have been strictly asked not to undertake any other service except hair cutting. Massage, spa and other activities are not allowed.

"It is just not economically viable to open the salon for only hair cutting services. We had only three customers over the weekend because people are wary of moving out of their homes. Some have been insisting on home services but we have refused. The female customers also want to know if they can get a facial or a massage along with a haircut," said Meeta Prasad who runs a salon in Indira Nagar.

She said that she would keep the salon closed after Eid because she would have to bear the losses. "I will have to pay full salary to the staff and also bear the air-conditioning costs. It is better to keep the business closed till the district administration gives full permission for all services," she added.

Despite Eid, salons have opened to an empty house in most areas.

"Women come to salons for other services like facials and waxing which are not being allowed at present. Majority of the men have already managed haircuts at home during the lockdown period and are not coming to us," said Rafiq who works at a salon in the Nakkhas area.

He further said that some customers were turning back when they were asked to give their names, addresses and mobile phone numbers.

"Salons offer personalised care and service and most clients do not want the world to know how frequently they visit a salon. Many people are going back because they do not want to divulge their personal details," said a salon owner in Hazratganj area, who has put up a notice saying that the salon is closed 'owing to personal reasons'.