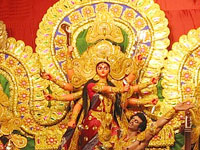 KOLKATA: Bengal BJP’s internal rift surfaced again over the issue of organising Durga Puja under the banner of the party. While the state president Dilip Ghosh said it would be a single-day event and not Puja, the party leaders involved in organising the event said the Goddess will be worshipped following all rituals for four days.

BJP’s state observer Kailash Vijayvargiya and national vice president Mukul Roy were seen busy organising the religious festival in full swing. A day after BJP leaders announced the decision to organise the Puja, Ghosh said, “It will not be a puja. BJP’s job is not organising puja.

There will be a one-day event where Prime Minister Narendra Modi will address via a special webcast titled Puja Ki Baat.” However, state vice president Jayprakash Majumdar said it would be the party’s puja that will be celebrated for four days following all rituals.

BJP’s move to organise the puja in Salt Lake is said to be first of its kind in the recent history of Bengal’s religious festivals and appears to be an attempt to woo the electorates ahead of 2021 Assembly elections. The venue will be the Eastern Zonal Cultural Centre’s building which is under the Union Ministry of Culture.

Meanwhile, BJP has denied that there was any political motive behind the announcement that Dona Ganguly, wife of Saurav Ganguly, will peform at the puja. The former Indian cricket skipper has been rumored as possible face for BJP in the state.

(THE NEW INDIAN EXPRESS)
364 Days ago