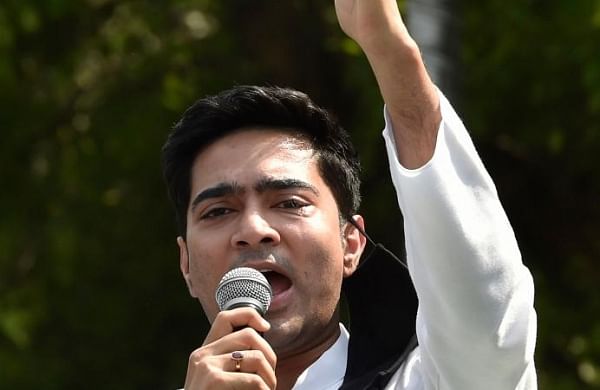 NEW DELHI: Enforcement Directorate Tuesday alleged before the Delhi High Court that West Bengal Police is acting at the behest of TMC MP Abhishek Banerjee, who "enjoys clout" in the state government, to derail the probe into an alleged coal pilferage scam.

The submission was made by the probe agency in its petition seeking a direction to quash two notices issued against its officers pursuant to an FIR lodged by Banerjee.

The High Court said that it will hear the ED's challenge to the police notices issued against its officers, arising from an FIR by the TMC MP, on September 21.

Additional Solicitor General S V Raju, appearing for ED, contended before Justice Yogesh Khanna that the notices issued pursuant to the FIR are patently illegal, malafide and a counter blast to the investigation in the coal pilferage case.

The Enforcement Directorate (ED), in its petition before the high court, said that in order to pressurize its officers probing the case under Prevention of Money Laundering Act, Banerjee, who is the nephew of chief minister Mamta Banerjee and under scanner in the case, lodged an FIR in April.

ED has sought a direction to quash two notices issued against its officers and any other subsequent notices that may be issued in the FIR, saying that they amount to abuse of process of law.

"The notices will not stand scrutiny even for a minute," Raju told the judge who deferred hearing on the petition, saying that the senior counsel for West Bengal will take care of the notices issued to the ED officers on July 22 and August 21.

"Once they are saying there is no other notice, we can fix (the plea for hearing) on Friday or Monday. Mr. (Sidharth) Luthra (appearing for West Bengal) will take care of it," said the judge after taking note of Luthra's submission.

"I don't think there will be a problem. Mr Raju, take it from me," said Luthra who also contended that the legal view was against the ED's stand.

In April, on a complaint by the TMC MP, an FIR was lodged by local police in West Bengal under various provisions of the Indian Penal Code for alleged commission of offences of forgery of records, forgery for purpose of harming reputation, defamation etc.

The petition, filed through Central government standing counsel Amit Mahajan, said that pursuant to this FIR, two notices were issued by the Sub Inspector, Special Cell (GS), DD of Kalighat Police Station, Kolkata to ED officers performing their statutory functions in the Headquarters in Delhi.

"The complainant in the instant FIR is a political heavy weight and enjoys clout in the State Government of West Bengal.

"The West Bengal Police is acting at his behest to derail the investigation being carried out by Enforcement Directorate," the plea said.

"It is pertinent to mention that the investigation into the illegal coal mining and the role of the complainant therein Abhishek Banerjee is being investigated by the Directorate of Enforcement in exercise of its statutory powers under PMLA in the Headquarters at New Delhi," it added.

The petition said that based on "reasonable belief and evidences", the probe agency issued summons to Banerjee for his appearance on three occasions, out of which he appeared only once on September 6.

"In order to pressurize the Petitioners/ IOs investigating the case related to illegal coal mining, Abhishek Banerjee lodged an FIR on date 05.04.2021, against a News Channel and in furtherance of the same, notices have been issued to the IOs investigating the case of illegal coal mining by the West Bengal Police. The said FIR has been registered with a malafide intention to derail the investigation under PMLA being conducted by the Directorate of Enforcement," the plea said.

The petition alleged that the issuance of notices against ED officers is "malafide and with the oblique motive and intent at stifling the fair and impartial investigation being undertaken by Enforcement Directorate for unearthing large financial scams / frauds taking place in the State of West Bengal and the country."

It also argued that the motive behind registration of the FIR and the subsequent issuance of notices is "only to harass the officers of the Directorate and to use the State Police Machinery to halt the investigation being conducted by the officers of the Directorate against highly placed persons in the State Government of West Bengal & their suspected role in the offence of money laundering".