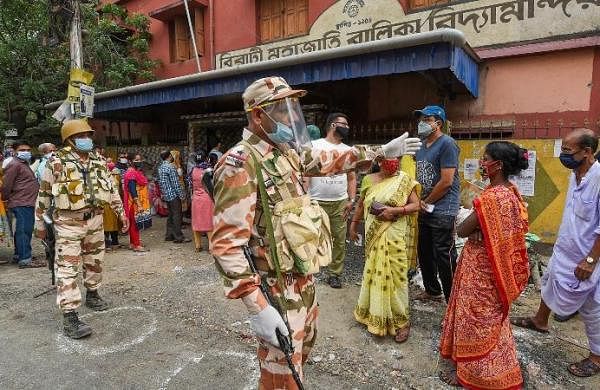 KOLKATA: The Election Commission of India (ECI) on Thursday dismissed allegations by Trinamool Congress that two of their activists were injured in firing by central forces in Ashok Nagar assembly constituency in North 24 Parganas district, an official said.

TMC activists had alleged two party activists were injured after they were hit by bullets fired by central forces outside booth number 79 in Ashok Nagar's Tangra area on Thursday when a few party members protested against a visit by BJP candidate for the seat, Tanuja Chakraborty.

Clashes broke out in the area between BJP and Trinamool Congress' activists and bombs were hurled, police said adding that unidentified people vandalised one vehicle carrying central policemen.

"Two of my party colleagues were injured after bullets fired by central forces personnel hit them in their legs. Both are undergoing treatment at a nearby hospital. The central forces are not doing the right thing," TMC candidate Narayan Goswami alleged.

Following this, the ECI sought a report from officials posted in the district and based on inputs dismissed the allegations.

"There was no incident of any firing by central forces. We have no such report. This is a baseless allegation," a senior official told PTI.

During the fourth phase of polling held on April 10, four persons were killed after CISF personnel opened fire in self defence outside a booth in Cooch Behar districts Sitalkuchi area.