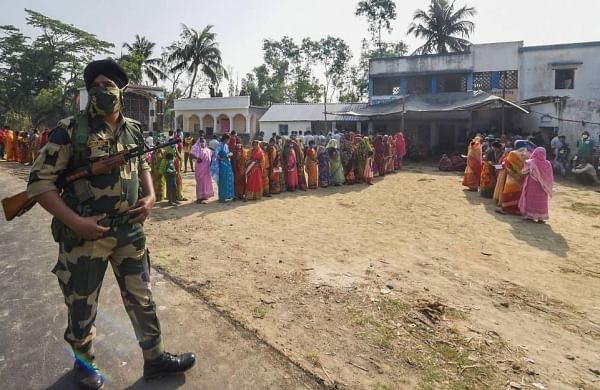 Srinivas Ghosh (54), a TMC panchayat member of Ketugram's Agardhanga area, was stabbed alleged by members of the BJP on Monday night when he was returning home, they said.

Ghosh was declared brought dead when taken to a nearby hospital, they added.

Three people were also injured in the incident and are undergoing treatment, a police officer said.

BJP denied the charges and said their members were in no way connected to the incident.

Tension was palpable in the area after the incident.

Police said a huge contingent of personnel was deployed to prevent any further flare-ups.

Four persons were detained in connection with the incident, they said.

Incidents of violence were reported from other parts of the state as well.

In Coochbehar district, the house of BJP activist Bharati Nandy in Dinhata was set on fire allegedly by TMC supporters, a police officer said.

Incidents of violence were also reported from Tufanganj where houses of several BJP workers were vandalised, he said.

At least 15 houses of BJP workers were vandalised in Howrah, police said.

A probe has been started into the matter, they said.

Meanwhile, the West Bengal government has informed the Election Commission that it has provided security to the returning officer of the Nandigram assembly constituency which saw a cliffhanger between TMC chief Mamata Banerjee and BJP's Suvendu Adhikari, sources said on Tuesday.

On Monday, the Trinamool Congress (TMC) leader had alleged that the returning officer of Nandigram did not order recounting of votes even after she demanded it as he feared for his life.

The sources said the returning officer was provided security in person and at his home on the directions of the Election Commission (EC), amid reports that he was under pressure while performing his duty.

On Tuesday, the poll panel wrote a fresh letter to the West Bengal government asking it to take all appropriate measures to keep a strict watch and monitor on a regular basis the security provided to the officer.

The EC has also asked that the officer should also be extended appropriate medical support and counselling.

Citing the letter, the sources said that the state government has been told that any pressure or harm or even perception or furtherance of any such narrative shall have serious implications on the entire machinery deployed during the elections.

The state's chief electoral officer (CEO) has already been directed to ensure the safe custody of all election records, including polled EVMs and VVPAT machines, video recordings, and counting records strictly in accordance with laid down guidelines.

The CEO will also coordinate with the state government for additional security measures at such locations, if needed.