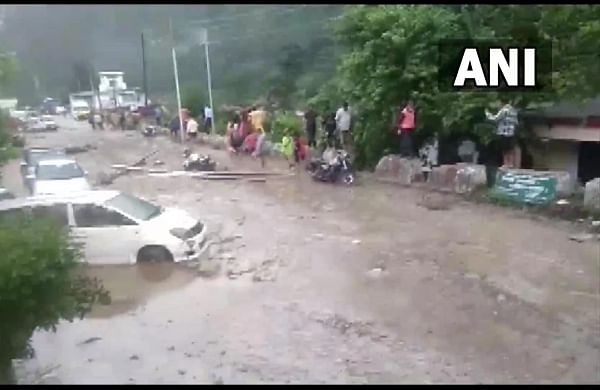 AHMEDABAD: Gujarat Chief Minister Bhupendra Patel spoke to his Uttarakhand counterpart Pushkar Singh Dhami on Tuesday regarding Gujarati pilgrims stuck in the northern state following incessant rains there and urged him to extend all possible help to the visitors.

As per a rough estimate, around 100 pilgrims from different parts of Gujarat, who went to Uttarakhand for the Chardham Yatra, were stranded following heavy rains and landslides there, Gujarat Revenue Minister Rajendra Trivedi said.

Gujarat CM Patel spoke to Dhami over phone and urged him to provide necessary help to the stranded pilgrims from Gujarat.

About 80 to 100 pilgrims from Gujarat are currently stuck in different parts of Uttarakhand due to heavy rains and bad weather, Trivedi said.

"Out of them, six are stuck at a considerable height near the Kedarnath temple. However, they are not in any danger. Others are currently staying in hotels in other places such as Joshimath. At present, all the stranded pilgrims are safe, including those six," he said.

While the weather is now getting better, several roads are closed due to landslides, the minister noted.

"We are in contact with the Uttarakhand government to airlift those six pilgrims. It is not possible at present because of the rough weather. They will be rescued using a helicopter once the weather improves," Trivedi said.

Among those stuck in Uttarakhand included a group of 18 people from Rajkot, six persons from Maninagar area of Ahmedabad and six youths from Thaltej area of the city.

One of the stranded persons from Rajkot, Mahesh Sorathiya, in a video message said, "We are a group of 18 pilgrims from Rajkot who are on the Chardham Yatra.

Due to bad weather, we have been stuck in a hotel in Netala area on Gangotri road for last two days. Luckily, we all are safe here. We are waiting for the weather to clear so that we can begin our journey."

Prime Minister Narendra Modi on Tuesday spoke to CM Dhami to take stock of the situation in Uttarakhand.

Five people, including three labourers from Nepal, were killed and two others were injured in rain-related incidents in Uttarakhand on Monday.

The Uttarakhand authorities have advised Chardham pilgrims not to proceed to the Himalayan temples till the weather improves.