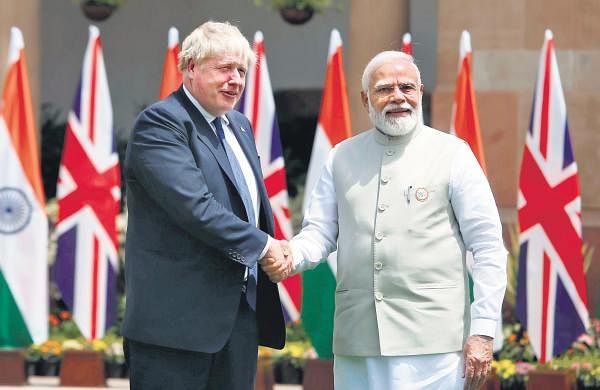 “Congratulations to the people of India on 75 years of Independence. During my recent visit to Gujarat and New Delhi I saw for myself the thriving living bridge between our countries. I look forward to seeing these bonds go from strength to strength in the next 75 years,’’ said Johnson.

“Please, accept warmest congratulations on the occasion of the 75th anniversary of India’s independence,” Russian Federation’s President Vladimir Putin said in a statement. In the statement addressed to President Droupadi Murmu and Prime Minister Narendra Modi, Putin highlighted India’s importance in the world, saying, “Over the decades of independent development, your country has achieved universally recognised success in the economic, social, scientific, technical and other fields. India rightfully enjoys considerable prestige on the world stage and plays an important constructive role in resolving pressing issues on the international agenda.”

US President Joe Biden too extended his greetings to India. He also said that the US and India also celebrate the 75th anniversary of diplomatic relations this year and the two democracies will continue to stand together to defend the rules-based order, advance a free and open Indo-Pacific and address the challenges that the world is facing.

“As people around the world, including 4 million proud Indian Americans celebrate the 75th Anniversary of India’s Independence, the US joins the people of India to honour its democratic journey,’’ Biden added. Meanwhile, French President Macron took to Twitter to congratulate Prime Minister Narendra Modi and the people of India on the occasion. “Dear friend NarendraModi, dear people of India, congratulations on your Independence Day! As you proudly celebrate India’s stunning achievements in the past 75 years, you can count on France to always stand by your side,” Macron tweeted.