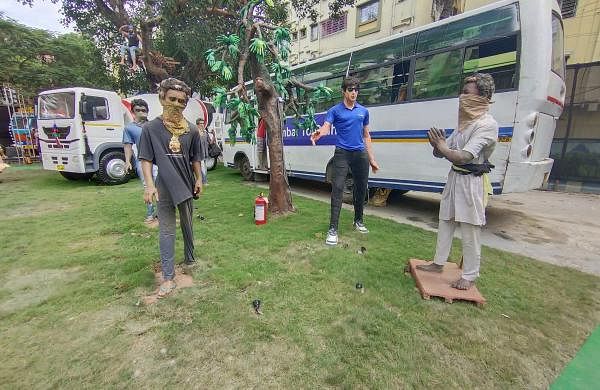 Actor Sonu Sood - who earned the title of 'Messiah of Migrants' for helping thousands of migrant workers reach their hometown amid the COVID-19 lockdown, has now found a special place in the heartland of Bengal.

As Pujo celebrations are gearing up in West Bengal with colourful lights and pandals, fans spotted a life-size statue of the 'Dabangg' actor at the Keshtopur Prafulla Kanan Durga Puja in Kolkata.

Sood's acts of benevolence depicted at the pandal shows him helping migrants return to their homes safely during the nationwide lockdown imposed to contain the spread of coronavirus.

Reacting to the statue, Sonu Sood said that this was his biggest award ever.

My biggest award ever https://t.co/4hOUeVh2wN

According to Hindustan Times, a member of the puja committee said that they have decided to use the plight of the migrant workers as the theme for the puja this year as they had struggled a lot during the lockdown.

Earlier, pictures from another pandal, which replaced the idol of Goddess Durga with that of a female migrant worker carrying her children, went viral on social media.

"Putting a smile on their faces is the most special feeling. No blockbuster has given me such a feeling. It is easy to blame the government or other individuals, but I believe in doing my bit too," Sood had earlier said at an interaction webinar 'Time Pass'.

In September, Sood was conferred with the prestigious SDG Special Humanitarian Action Award by the United Nations Development Programme (UNDP).

He has helped more than 15,000 migrant workers head home, the majority of them belonging to Bihar, in addition to arranging food and shelter for over 45,000 other people as well as sponsor many students' tuition fee and aid the poor pay for their surgeries and more.