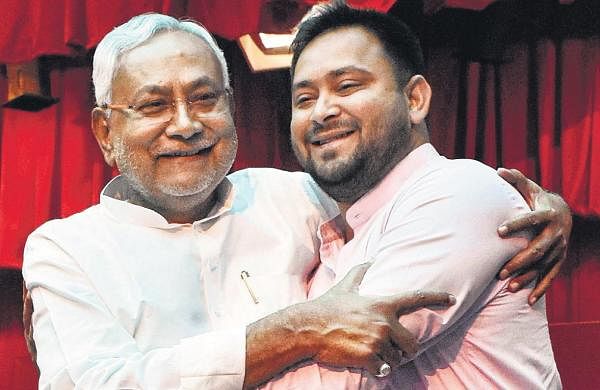 PATNA: Shortly after taking oath as Bihar chief minister for the eighth time, Nitish Kumar on Wednesday fired his first salvo at Prime Minister Narendra Modi, saying, “The one who came to power in 2014 should worry about 2024 whether or not they will be in power after that.”

He added that he would work for Opposition unity to defeat the ruling NDA at the Centre, giving credence to speculation that he could later shift to national politics, vacating his chair for RJD’s Tejashwi Prasad Yadav when the time came. For the record though, he claimed he was not a claimant to the post of PM and also did not harbour any such ambition.

Sharad Yadav, former JD(U) head who is now with the RJD, did not rule out the possibility of Nitish emerging as the Opposition’s PM candidate for 2024. Within the JD (U), its parliamentary board chairman Upendra Kushwaha said, “Nitish Kumar has all the qualifications to become the PM. We are not staking any claim but he possesses all qualities for the post.” JD(U)’s national chief Rajiv Ranjan Singh echoed him.

“It is too early to say anything as Nitish dumped the NDA to form a government with the seven-party Mahagathbandhan (Grand Alliance) just a day ago. But it is also true that he can be a PM candidate if the Congress takes the lead,” remarked an analyst on the condition of anonymity.

The mood was upbeat in the Grand Alliance during the swearing-in ceremony. RJD workers distributed sweets outside Raj Bhavan till the event was on. Wide smiles plastered on the faces of RJD, JD(U), Congress, Left parties and HAM laeader said it all.

There was no BJP representation at the ceremony, which its leader Sushil Kumar Modi attributed to not getting a formal invite. Sushil Modi later created a flutter by claiming Nitish wanted the Vice President’s post, adding he was ready to let the BJP head the NDA government in Bihar as quid pro quo. But when the BJP turned it down, he walked out of the NDA, alleged Sushil Modi. But Rajiv Ranjan Singh dismissed the claim, poking Sushil Modi instead, recalling how the  BJP ‘punished’ him for his proximity with Nitish.

Jobs to youth in a month: Tejashwi
Tejashwi touched Nitish’s feet after taking oath of office as the deputy CM. He later said the aspirations of the youth would be fulfilled as the govt would initiate the process of providing them jobs within a month