Bihar floods: Evacuees at relief camps to be tested for COVID-19 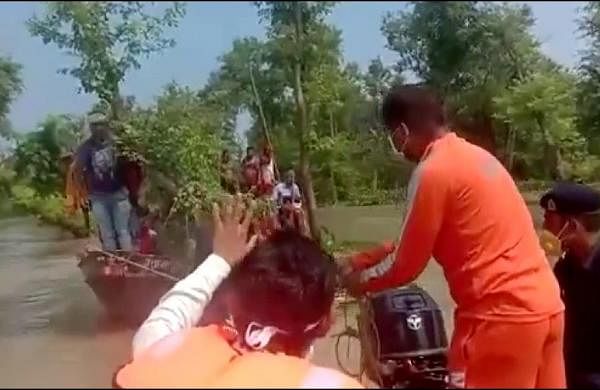 PATNA: Now, the people, stationed at flood relief camps after safely evacuating them from flooded areas in Bihar, would be tested for COVID-19 with the Rapid Antigen Kits and given masks for free.

Chief Minister Nitish Kumar reviewing the ongoing relief and rescue operations in the state's 11 flood-hit districts,on Wednesday evening with  WRD minister and officials, directed them to make arrangement for the rapid antigens testing facility at all flood relief camps.

According to official sources, 19 mega relief camps have been set up across all the 11 affected districts of which 102 blocks have totally become affected with the waist deep flood water.

Sharing this, Water Resource Department (WRD) minister Sanjay K Jha said that the CM has also directed to distribute masks both at the flood relief camps and wherever the works of flood protection are being carried put .

"The CM also stressed and directed officials to ensure social distancing among the people stationed at relief camps and community kitchens and where the flood protection works are going on,"Jha said,adding that the arrangement for the antigen testing would soon be made as per the directive of CM.

At present, 981 community kitchens are being run for serving foods to marooned people in the flooded districts, where 5,71,122 people are served foods daily. As per an official figure, around 38,47,531 people of different districts reeling under flood fury have been affected by flood.