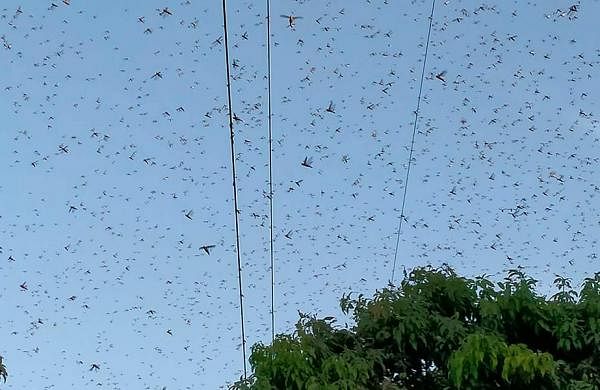 PATNA: Amid the panic running high among the farmers over the possibility of locust attacks on the standing crops ahead, the state government on Friday put a sound high alert in all the districts including the six in particular that share border with the Uttar Pradesh.

Citing the movement of swarms of locusts towards Bihar from eastern parts of neighboring UP, the state agriculture department has directed the district magistrates of all districts to take all efforts to control and foil the locust invasion on the crops.

A 3-page advisory has also been issued to each of the 38 districts battling with the COVID_19 outbreak. "Since the swarms of locusts have been reported to be moving towards east, a possibility is strong of their attacks on the crops and fruits falling en-route to them", the department has stated.

In Bihar, the seasonal fruits like litchi and mango are standing in the clusters of orchards from western, southern to eastern parts of the state. "We are extremely worried and concerned about the foiling of the locust's attacks by hook or by crook. In the advisor, the farmers have also been asked to adopt some traditional modes like a drum, utensils beating, and crowd-voicing to chasing away the swarms of locusts," a senior official of agriculture department said anonymously.

The state government has also decided to carry out chemical spraying on the trees from midnight to early morning because the locusts stay on the trees soon after the sunsets. According to agriculture minister Dr. Prem Kumar, districts sharing a border with the UP namely Gopalganj, Kaimur, Chapra, Siwan, Buxar and West Champaran in particular have been put on the maximum high alert as the swarms of locusts may infiltrate into Bihar through these districts.

Kumar said that the department has been in constant touch with other states to know the ways to tackle down the locusts' menace if it emerges in the state. Meanwhile, sources of the agriculture department, said that services of drones may also be used to spraying the chemicals if required and dozens of drones are being readied to be used depending upon the situation ahead. As per a rough estimate, if the locust attack takes place crops and fruits standing in the fields and orchards worth Rs 100 crores would be damaged.