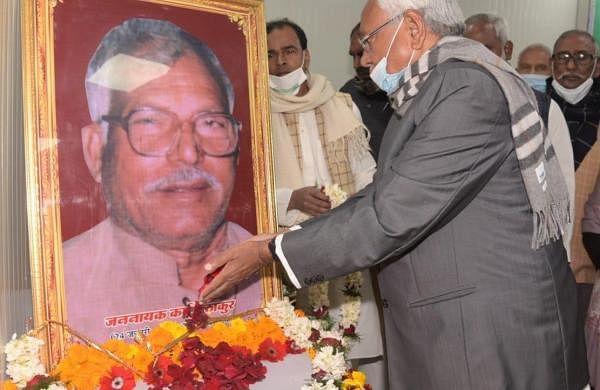 PATNA: Leaders of almost all political parties in Bihar attacked their opponents, while celebrating the 97th birth anniversary of late socialist leader Karpoori Thakur on Sunday. However, all parties in one voice demanded that the veteran leader is accorded the country's highest recognition, the Bharat Ratna.

Chief Minister Nitish Kumar, while attending JDU's function to celebrate Karpoori Jayanti, said that he has always been working following the ideals of Jannayak Karpoori Thakur to bring the marginalized people of the society into the mainstream. “But for some people in politics, coming to power means to enjoy the power (satta ka sukh)”, taunted Nitish Kumar as an indirect jibe at RJD. Nitish Kumar further said that some people speak out loudly against him for their own publicity, instead of working for the poor in society.

Targeting the Opposition for negative posts on social, media, Kumar said that the proper use of social and other digital media platforms should be promoted instead of using it negatively.  “We should not forget that a society cannot grow without positive thinking.  We just have to stay engaged in our work, united and working for the empowerment of all and sundry”, he said.

Another JDU leader Bijendra Prasad Yadav that many people in the Opposition celebrate anniversary of Jannayak Karpoori Thakur for votes. “The people of this state have to be careful with such people but we are try to serve the people following in the footprints of Karpoori Thakur”, he said.

RJD leaders took a jibe at CM Nitish Kumar saying that some people have forgotten the ideals of Karpoori Thakur for continuing in power.

Jagdanand Singh of RJD said that those who have forgotten the ideals of Late Karpoori Thakur have no right to celebrate Thakur’s jayanti. The RJD leaders including Tejashwi Yadav also demanded Bharat Ratna for Karpoori Thakur posthumously.

BJP and the HAM also said that some people in politics, referring indirectly to RJD and others in Opposition, used the name of Karpoori Thakur for politics only instead of following his ideologies.

Meanwhile, Ramnath Thakur-the son of Late Karpoori Thakur and MP( RS), said that the state government had recommend for the Bharat Ratna to his farther Karpoori Thakur in 1989 when Bhagwat Jha Azad was the Chief Minister with a resolution passed by both houses in the state.