Bihar will be largest government job providing state within a month: Tejashwi Yadav 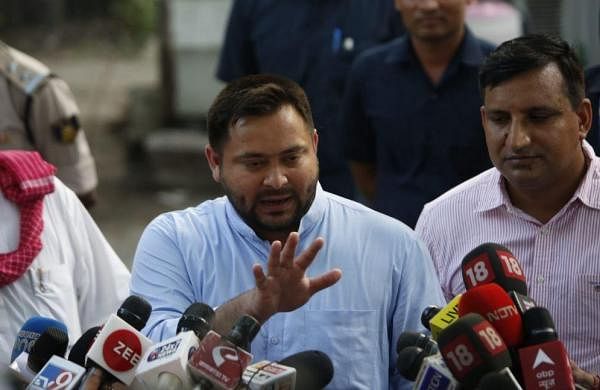 NEW DELHI: Ahead of the floor test in the Bihar Assembly that is slated to be held on August 24, newly appointed Deputy Chief Minister and Rashtriya Janata Dal leader Tejashwi Yadav on Friday said that issues like employment and those related to youth's future will be addressed if they remain in power.

"Since we have formed the government, issues like employment and those related to youth's future are being addressed. Issues like Hindu-Muslims and Mandir-Masjid were only discussed when BJP was in power. Hatred was sown in the society then," Tejashwi Yadav told ANI.

Earlier in the day, Yadav called the recent tie-up of Nitish Kumar's JD(U) "a natural alliance and not a deal", and claiming that within a month Bihar will be the largest government jobs providing state.

Speaking to the reporters in the national capital where he reached on the occasion of Raksha Bandhan to meet his father and RJD supremo Lalu Prasad Yadav, Tejashwi said, "It's a natural alliance, not a deal. This is the real 'Mahagathbandhan' which was formed by Lalu Yadav Ji and Nitish Kumar. We welcomed Nitish Kumar's decision and came together."

Talking about the timeline of the fulfilment of his promises of providing jobs to the youth of the state, the Deputy CM said that it will only be done after the trust vote in the Assembly.

"We do not do BJP-style politics that we will threaten and buy the leaders. We will provide jobs, let the trust vote be over. We are very serious about this issue. Within one month, you will see that Bihar will be the single-largest job-giving state in government jobs," he said.

Meanwhile, with the change in government in Bihar, a session of the state assembly has been convened for August 24. Legislators of the ruling Mahagathbandhan have given a notice for the removal of Speaker Vijay Kumar Sinha.

Sinha, who is a BJP MLA, on Thursday refused to comment on the no-confidence notice submitted against him. "As long as I am on this post, I will give no statement to the media on this (political development)," Sinha told reporters.

The motion against Sinha is likely to be taken up by the House when it meets to enable the Nitish Kumar government to prove its majority.

Nitish Kumar-led government will go for a floor test on August 24. Kumar had earlier said that the government has the support of seven parties and 164 MLAs.