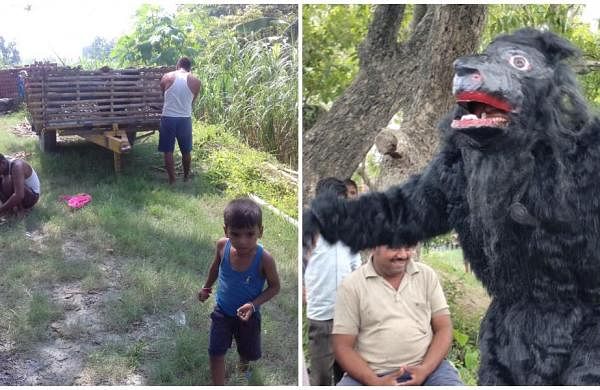 They trap the monkeys in cages made with bamboos on the trolleys of tractors and chase them off from villages wearing dresses of bears. The villagers have so far trapped more than 85 monkeys in the bamboos cages, made on the trolleys and handed over to the forest department.

"Not only this, we have bought four sets of bear-dresses from Shahjahanpur in Uttar Pradesh at the cost of Rs 12000 - collected from villagers. Now, villagers have started chasing off the monkeys during daytime disguising themselves as bears," said Milan Kumar, a youth of thes village.

Infact, villagers recall having spotted five to six monkeys, being let off here by some unknown persons in 20 years ago. "In the last 20 years, their population has increased to over 2000. Since 2010, with a rise in their population, monkeys have started wrecking havoc on the lives of people, by damaging crops and household items," Milan Kumar said.

Scared of these monkeys, villagers had knocked the doors of local politicians and others for help to get rid of this menace. "But none of them have heeded to ours request so far. Finally, we have adopted our
own ways to get relief from the monkey menace now. We are trapping them daily and handing over to the forest department," Bablu Kumar, another youth said.

The farmers of these areas have stopped the cultivation of sugarcanes and other crops just because of the monkeys, who uproot and damage the crops in herds. Also, dozens of villagers including women and children have been attacked and injured by the monkeys so far.

This village is surrounded by dense bushes and greenery that help the monkeys in taking shelters and breeding the population. "They have become so rude and boldly invade houses during cooking times and snatch away pots with foods and edible items," Milan Kumar said.

However, villagers said that when youths, disguising as bears, go to chase away the monkeys from human habitat areas, street dogs start posing threats to them considering them as bears. "Dogs attempt to injure the youths but some villagers have to chase the dogs also with sticks in hands to safeguard the youths in bear dresses," one of the villagers said.

This monkey menace has started spreading in other adjoining villages namely Kuartola, Tiwary tola and others. Villagers have appealed to Bihar CM Nitish Kumar to take an urgent step to save the villages from this menace of simians. "If the government fails to take any step in this regard, we will boycott the voting also in the upcoming assembly elections," warned the villagers.

When contacted, forest ranger Dinesh Paswan said that monkeys trapped and handed over the forest department by villagers were let off in the Manguraha forest areas, near the Indo-Nepal border.