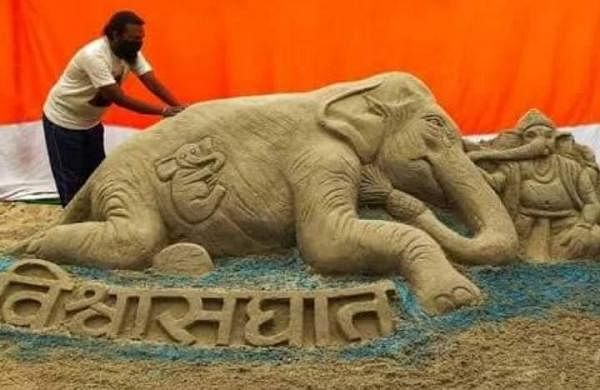 PATNA: The alleged murder of a female pregnant elephant in Kerala has not only triggered mass condemnation from every quarter of the society a famous sand artist in Bihar, Ashok Kumar, express his empathy over the cruel act of barbarism on a wild animal through his art.

Through his sand portrait for the elephant at a riverbank, Kumar has expressed condemnation and strongly sought justice against the cruel and inhumane act.

Kumar has termed the act as barbarism as 'vishwasghat' (betrayal) and put up a sand image of lord Ganesha before the trunk of the dead elephant.

"Even Lord Ganesh is shocked at this cruelest act and the perpetrators of the crime would get punished both by court and God", Kumar said

Meanwhile, many social organisations and other intellectuals, wildlife activists have condemned the  act and demanded immediate arrest of whoever was involved in it.

Shambhu Tewari, a wildlife activist of Patna, said that the People of Palakkad district wherein the such cruelest act of barbarism was perpetuated must come out and trace the killers.

"Social boycott in addition to the legal action is the need of the hour to stop cruelty against the wildlife animals", he said.