BJP-JD(U) alliance as 'superhit' as opening pair of Sachin-Sehwag in cricket: Rajnath at Bihar poll rally 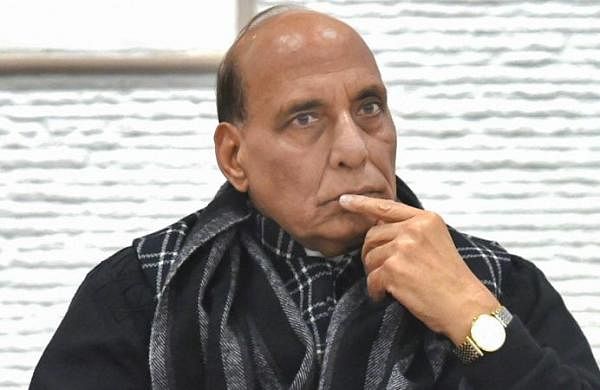 KAHALGAON: Calling the BJP-JD(U) partnership as "superhit" as the opening pair of Sachin Tendulkar and Virender Sehwag in cricket, Defence Minister Rajnath Singh on Wednesday said one can debate on the quantum of development done by the alliance government in Bihar, but no one can point a finger at Chief Minister Nitish Kumar on corruption.

Attacking the opposition RJD, Singh said the people had witnessed its 15-year tenure and can see the difference between its "misrule" and the good governance of the Nitish Kumar-led alliance government.

Addressing a rally here in Bhagalpur district ahead of the Assembly polls beginning October 28, Singh said, "The alliance of the BJP and the JD(U) is as superhit as the opening pair of Sachin and Sehwag of the Indian cricket team."

He said the alliance government has provided basic facilities of electricity, road and water, which Bihar lacked for decades.

"People have seen the 15-year rule of 'lalten' (RJD's poll symbol lantern) and they have also seen the development of Bihar during the BJP-JD(U) alliance government. The performance of these two governments cannot be compared. The state transformed under the NDA government," Singh said.

Praising Chief Minister Nitish Kumar and his deputy and BJP leader Sushil Modi, Singh said there are no charges of corruption against them.

"I am not making this claim that Nitish Kumar has done everything for Bihar.

It could be debated whether he has done enough work or less work or more was required to be done, but there can be no debate on their integrity," Singh said.

Singh said no one can point a finger at Kumar on the issue of corruption.

Taking potshots at the Rashtriya Janata Dal (RJD), Singh, speaking in local Bhojpuri language, said 'lalten' has cracked and its oil has leaked and nothing will work now.

Singh said welfare schemes of the Modi government not only empowered the poor and the downtrodden but also raised their standard of living.

Speaking about the soldiers of the Bihar Regiment who sacrificed their lives during a violent standoff with Chinese soldiers at the Galwan Valley in eastern Ladakh along the Line of Actual Control (LAC), Singh said he is thankful to the people of the state for their bravery.

"You all know what happened at Galwan Valley, it was Bihar Regiment soldiers who saved the pride of our motherland.

They sacrificed their lives and I thank all of you for their sacrifice," Singh said.

Polls for the 243-member Bihar assembly will be held in three phases -- October 28, November 3 and November 7 -- and the counting of votes will take place on November 10.

The BJP-JD(U) combine is pitted against the grand alliance of the RJD, the Congress and Left parties.

Some other smaller parties are also in the fray.