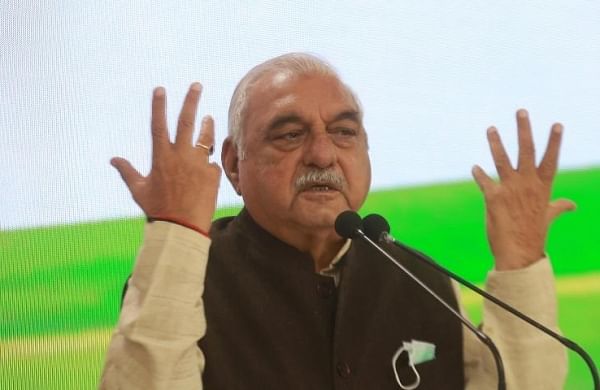 CHANDIGARH: Former Haryana chief minister Bhupinder Singh Hooda on Saturday accused the BJP-JJP government of the state of doing nothing but harass farmers and the general public during its two-year tenure so far.

The BJP-JJP coalition government has failed completely in two years, the leader of opposition in the state said.

The government has done nothing but scams, he added.

"We have started the 'Vipaksh Aapke Samaksh' outreach programme to expose all anti-people policies and the failures of the government. We will awaken the government by raising issues highlighted by the people. The first such successful programme was held in Karnal, and the next would be in Jind, after the Ellenabad by-elections," he said in Rohtak.

Systematic procurement of paddy is not taking place in the state, and due to this, farmers are being compelled to sell their crops at low rates, Hooda said.

"Not only this, there is an outcry in entire Haryana for DAP fertiliser. Farmers have to wait in long queues for several hours but they are not getting the fertiliser," he said.

While farmers are struggling for their needs, the common man is struggling to deal with basic problems like those of electricity and water, the Congress leader said.

"The condition of roads in the entire state, including Rohtak, is pathetic. There is hardly any district in the state where roads are drivable," he said.