'BJP seeks to change history to suit its agenda': Mamata lashes out at saffron party 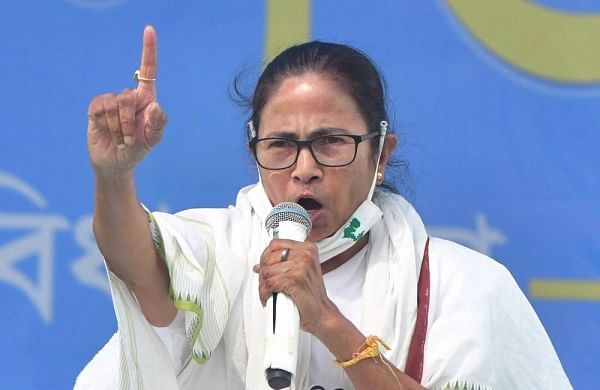 KOLKATA: Trinamool Congress supremo Mamata Banerjee on Wednesday attacked the BJP claiming that the party is out to change the history of several places to suit its agenda and will impose a totalitarian regime that will dictate what people should eat and how they should dress.

Without naming Union Home Minister Amit Shah, Banerjee said that a good-looking man from Gujarat has predicted that the BJP will win 68-70 of the 91 seats that went to polls in the first three phases in the state, but actually it will not get more than 25 seats.

"They (BJP) have renamed stations having great past. They have renamed a cricket stadium after the prime minister. The day is not far when they will change the name of you and me. They are out to change the history of places to suit their agenda," said Banerjee in the last of her election meetings of the day.

The chief minister of West Bengal, however, did not mention any rail station or place.

On February 24, the newly-refurbished arena in Ahmedabad's Motera area was renamed as Narendra Modi Cricket Stadium.

It was earlier called the Sardar Patel Stadium.

Likening Prime Minister Narendra Modi and Shah to "dictators like Hitler, Mussolini and Donald Trump", Banerjee claimed that they want to "impose a totalitarian regime which will dictate what we should eat, how we should dress and what we should think. Don't let them come (to power in West Bengal)".

Addressing a public meeting in Tollygunge assembly constituency in Kolkata, she alleged that the BJP was behind closing down of a heritage fair like the Poush Mela of Santiniketan and levelling of "false charges" against Nobel laureate economist Amartya Sen.

Banerjee said that "a good looking man from Gujarat predicted that the BJP will win 68-70 of the 91 seats that went to polls in the first three phases in the state.

She did not name Shah who said earlier in the day at Domjur in Howrah district that the BJP is confident of winning 63 to 68 seats in the first three phases of elections.

"The same person had got 15 seats in Chhattisgarh after predicting 65 seats in 2019, one-third seats in Maharashtra after predicting two-thirds. Even by a conservative estimate, the BJP won't reach beyond 25 seats in the first three phases (in Bengal)," she said.

The TMC leader charged Modi and Shah with running a "syndicate which can fund countless choppers and chartered planes to ferry one lakh BJP leaders to Bengal for poll campaign and book all major hotels in Kolkata and elsewhere for their stay."

On Modi addressing her as "Didi O Didi" in a sarcastic tone in his poll campaigns, Banerjee said that he does this as he considers her as a threat to his party.

"He is free to address me that way 100 times. It will only make me more important and belittle him," the TMC boss said.

Alleging that the BJP is using money power in the election, she claimed that the saffron party had offered Rs 25 crore to a film star for not campaigning for the TMC, but the actor refused.

Banerjee urged people to ensure that her party gets more than 200 seats in the eight-phase election to the 294- member state assembly.

She alleged that the Election Commission has arranged for an eight-phase poll to enable BJP leaders to campaign even on a day of polling.

Banerjee was addressing the public meeting in support of TMC candidate and minister Aroop Biswas from Tollygunge where Union minister Babul Supriyo, a singer-turned- politician, is the BJP candidate.

The CM described Supriyo as an outsider in Tollygunge, "who has been brought from Asansol (his Lok Sabha constituency) for reasons best known to his party."

Stating that she did not want to make any negative comment on "a good singer", Banerjee said, "But I am appalled by his utterances and his behaviour in recent times as a BJP leader."

She accused Supriyo of speaking in favour of a ponzi firm, against which a CBI probe is going on, years back, and alleged that BJP MP and assembly election candidate Locket Chatterjee had also hobnobbed with another scam-tainted chit fund company.