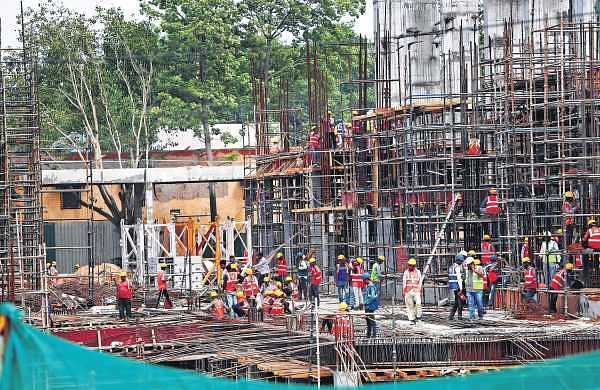 Planning to buy a plot in Delhi of up to 500 square meters and worried about approvals? Well, it is easy now as the process has become paperless, takes less time, and requires fewer documents. The three civic bodies in Delhi have launched a web portal to make the process of getting approval for building plans friendlier for residents of the national capital.

With elections to the Delhi Assembly just a few months away, the BJP-dominated MCDs have also extended the relaxation in rules for approval of building plans to residential buildings of up to 500 square meters, from 105 square meters earlier.

“The vast majority of individual cases (other than large builders’ projects) get covered within the 500 square meter range. In fact, the provision for self-certification up to 500 square meters is in the bylaws from the beginning. For some reason it had not been incorporated in the online mechanism, so that has been done now,” said Varsha Joshi, Commissioner, North Delhi Municipal Corporation.

In October this year, the South Delhi Municipal Corporation, the nodal agency among the civic bodies for improving the ease of doing business, carried out a slew of reforms.

A major reform was developing an online module for approval of building plans in respect of low-risk residential buildings of up to 500 square meters under the Unified Building Bylaws 2021 to ensure transparency and make the process easier for the applicants.

“People from affluent colonies such as Greater Kailash and Defence Colony have started building flats instead of this. We were getting a lot of requests from them to ease the residential land approval policy, hence the decision was taken,” said Bhupinder Gupta, chairperson of the Standing Committee of SDMC.

According to the civic body, one can apply for a construction permit online by using the Common Application Form, and no personal interaction with MCD officials or other officials concerned is required.

“A dashboard has also been developed to provide the latest status of each case in order to make sure that things are moving in the right direction, hence there is no scope for any delay. All payments can also be made online and calculations can also be done with the help of an online calculator,” said a top official from SDMC.

The web portal, inaugurated by Lt. Governor Anil Baijal, revolves around a system in which the inputs submitted by the registered architect are checked automatically by the software-based rule engine of the system, which has been made in line with the building bylaws, Master Plan 2021 and the relevant laws.
“Until now, this facility was available for residential building plans of up to 105 square meters, which has now been extended to 500 square meters, which will help Delhiites in getting the building plan approved without visiting an MCD office,” the official said.

What is a building plan?
In 2016, the then Union Minister for Housing and Urban Affairs, Venkaiah Naidu, had announced the modification of the Unified Building Bylaws for Delhi, which were revised after 33 years.

It was decided that for approval for building construction, a common application form (CAF) would be devised for online submission by the applicants to the MCDs concerned, instead of them applying to various agencies such as the Airports Authority of India, National Monuments Authority, Delhi Fire Services, Delhi Jal Board, Delhi Urban Arts Commission, Delhi Metro, the power distribution companies, and the central ministries concerned.

How does the process work?
For approval for plots of up to 500 square meters, there is a Saral scheme. The applicant needs to select the architect /structural engineer registered with the MCDs who will guide and prepare the plan as per the bylaws.

“We have 1,491 architects registered with the system who can immediately start using this facility, and the process can be completed within a single day.

New architects can get themselves registered through this online system by completing the registration formalities. This is the first initiative of its kind in any state or Union Territory in the country,” said the spokesperson of SDMC.

The official noted that in order to reduce manual efforts by landowners to secure approvals, the architect will find out the requirement for a No Objection Certificate.“One doesn’t have to go to any office for obtaining an NOC for sanctioning of a building plan. If the architect fills up the CAF, the required information is transmitted online to the concerned NOC agency for issuance of NOC to the MCD,” added the spokesperson.“The software has evolved over time, resolving doubts and bugs, through a process of consultation with all registered architects; there is a WhatsApp group with them where they report problems and we troubleshoot instantaneously,” said Varsha Joshi, the North civic body’s chief.

How will it benefit residents?
Apart from speeding up approval of building plans and reducing the manual efforts required for the same, a major reason behind the decision of the civic bodies to ease the process was curbing corruption among the engineers, for which the civic bodies are infamous.The online process practically eliminates corruption, said Joshi.

“Of course it will end corruption. There is now a clear audit trail for every case, so there is no scope for confusion. Most of the work of analysis is done by the rule engine built into the software. The online mechanism is to be used by the architect; for any qualified architect, registering on the portal is a simple and quick process,” she said.

“Earlier, things were very haphazard… which documents or NOCs were required from which bodies was never made clear. But now it is the architect’s responsibility. However, if any variations are found, that will definitely come under scrutiny. Secondly, there is no payment by cash or cheque involved. It is completely online, so it will eliminate corruption. Also, speeding up the whole process was our target,” said Gupta, the head of the SDMC Standing Committee.

An official from the MCD said on condition of anonymity that the top engineers in all the three civic bodies always used to take bribes to sanction proposals related to property, irrespective of the plot size or whether it was residential or commercial.

“Even the applicants knew that unless they paid a bribe their proposal won’t be sanctioned. People would come mentally prepared to spend extra money,” the official noted.

Any drawbacks?
Abhishek Dutt, a Congress municipal councillor from South Delhi, said despite the civic bodies’ initiative to improve the ease of doing business, people faced problems.“People are still troubled. The MCD staff still arrives to unnecessarily harass residents building small apartments, but they never go to inspect those who are building factories. The online application process is not that easy. The idea is to end corruption, and I hope it is implemented in the right spirit,” Dutt said.

Jagdish Mamgain, former chairman of the standing committee of the Municipal Corporation of Delhi (2007-2012) said that online registration was benefiting the officials more than the applicants.
“There has been no drastic rise in the number of applications. Online registration was started earlier as well, but that is not the way to draw people’s attention. Also, the money required for the approval is the same. So there is no major benefit to the applicants,” he stated.

Cost calculation
Building Permit Processing Fee is Rs 10 per square metre of built-up area. The applicable charges are calculated by the online fee calculator. They are to be deposited online, such as by an RTGS / NEFT transfer. No cash, cheque or demand draft is accepted.