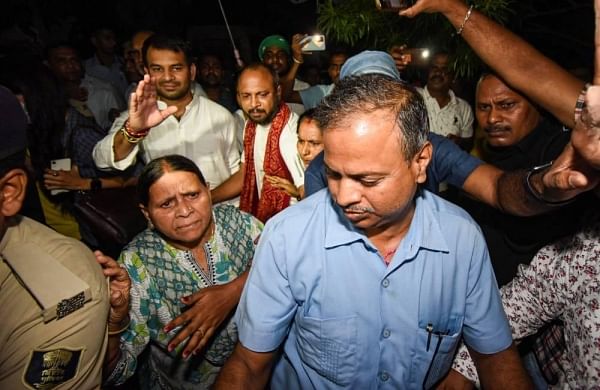 A CBI team had early in the morning raided the 10, Circular Road residence of Rabri Devi who has been named as accused in a fresh corruption case lodged by the investigating agency.

The case relates to Prasad's tenure as the railway minister and besides the couple, their two daughters Misa Bharti and Hema have been named in the list of 17 accused, according to the FIR uploaded on the CBI website.

The interrogation of Rabri Devi continued for more than 12 hours and heavy deployment of police was made to ensure that the CBI team could exit safely in the midst of hysterical RJD leaders who had squatted on the adjacent street in protest against the "conspiratorial action".

"We reiterate that the latest CBI case and the raids conducted across the country in connection with the same are sponsored by BJP which rules the Centre", alleged the BJP spokesman.

Outside 10, Circular Road, the allegations were made by Shakti Singh Yadav and Ejya Yadav, both former MLAs and currently spokespersons.

Ejya Yadav, along with another spokesperson Sarika Paswan led women activists of RJD in raising slogans against CBI and the "vendetta" of Narendra Modi government at the Centre.

They rued the absence of Prasad, who is in Delhi, and younger son and political heir Tejashwi, currently abroad, at the time of interrogation and claimed that had either of them been present inside, "the CBI sleuths would not have dared to cross limits".

Incidentally, Prasad's elder son Tej Pratap Yadav, largely seen as a maverick and a misfit, was inside the premises while the raids were being conducted.

Sources close to the family said he was made to sit outside the main quarters where Rabri Devi was being interrogated.

Tired by the long wait, Tej Pratap is said to have whiled away time by getting his neck and back massaged by one of his lackeys.