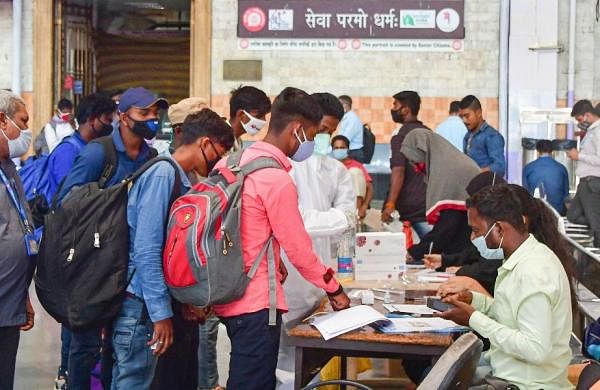 NEW DELHI: Even as the Centre dispatched another central team to visit Maharashtra on Saturday, a report by the team sent earlier this week has hinted at the possibility of indigenous mutation making the Covid-19 virus more infectious but less virulent in parts of the state.

Maharashtra, bearing the highest brunt of the Covid-19 caseload since the beginning of the pandemic last year, is seeing a worrying rise of infections over the fast few weeks, following a swift decline in cases for nearly two months.

The state on Friday registered 10,216 new infections -- the highest since October 16 -- maintaining a trend of upward growth in daily cases. The state now has 88,838 active cases after touching a low of 30,265 on February 10.

The 3-member team has also said in its report to the Centre that while the exact causes for the rise in cases are not known, possible factors for the surge could be lack of Covid inappropriate behaviour, pandemic fatigue, gram panchayat elections, marriage season, the opening of schools, the slowdown in testing, crowded public transport apart from laxity on the part of the health machinery.

“The virus is spreading to hitherto unaffected areas and most cases are asymptomatic. People are not strictly following quarantine or getting testing done. The sense is that the current wave is less virulent,” says the six-page report.

The team, led by joint secretary Nipun Vinayak in the Union Health Ministry, has also informed the Centre, after interacting with top functionaries including Chief Minister Uddhav Thackray, that the state has asked for more flexibility in Covid-19 vaccination including data management.

The state, according to the report, has said that if the final goal is to increase immunity in the community by vaccinating a maximum number of people, prioritisation may not be serving much value, thus seeking permission to vaccinate everyone willing subject to the availability of doses.

The central officials, which also included a public health expert and an epidemiologist, had visited 6 districts witnessing a resurgence in cases and interacted with government functionaries at the ground level.

Based on the feedback they received in Pune, a hotspot city that reached a high level of infections earlier but is seeing a second wave, their report lists “possibility of indigenous virus mutation making it more infectious and less virulent... High-temperature variations within a day ranging between 8-10 degrees a day may be conducive (for the virus to thrive),” as a probable cause of the rise in cases.

While senior Union Health Ministry officials, including V K Paul, Member (Health), Niti Aayog and head of the national Covid-19 task force, have on earlier occasions ruled out the role of mutations in the resurgence in cases, scientists say there may not be enough evidence yet to confirm either way.

“The epidemiological data suggest that mutation in the virus could have some role to play in the rise in cases in some parts but it will be more prudent to wait for results from more genetic sequencing of virus samples,” said a scientist attached with one of the 10 institutes currently involved in SARS CoV 2 sequencing consortium.

Meanwhile, the central teams sent to Maharashtra and Punjab on Saturday have been asked to visit the hotspot areas in the states and ascertain the reasons for the surge. They have also been tasked with briefing top state bureaucrats on their observations and remedial measures to be undertaken by the state health authorities.