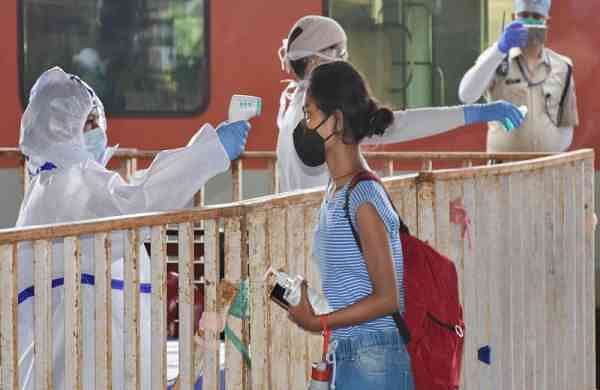 RANCHI: As per the fresh Central government guidelines, none of the districts in Jharkhand comes under the red zone for COVID-19.

“As per the new guidelines issued by the central government, none of the districts in Jharkhand qualify for red zones for COVID-19. Therefore, it could be said that we have 21 orange zones and 3 green zones in Jharkhand,” said the Principal Health Secretary Nitin Madan Kulkarni. He, however, admitted that the doubling rate in the State has definitely increased after the influx of migrant workers.

“Since testing for everyone coming from other States is not possible, we have identified 24 hotspots in the Country. Samples of only those coming from there showing any signs of symptoms are being sent for testing,” said the Principal Health Secretary. Out of the samples taken from 19,686 migrants so far, highest 1 per cent, coming from Mumbai have tested positive, he added.

According to Kulkarni, the total positivity rate of COVID-19 cases in Jharkhand is 0.73 per cent and the total numbers of 42,245 tests have been conducted so far. Jharkhand has testing facilities at four Government laboratories, he added.

“Testing of about 2300-2400 samples are being examined every day in Jharkhand,” said Kulkarni.

The official said that almost all the positive cases detected in Jharkhand are asymptomatic which are being kept either in home or institutional quarantine.

Meanwhile, the influx of about 25000 migrants every day is posing a big challenge before the officials as out of the 197 cases tested positive since May 1, after the first train reached here from Telangana, 156 are migrants coming from other states.

“This is definitely a challenge for all of us and we have to live with it. But the positive part is that all of them are asymptomatic and are recovery rate here is far better than many states,” said Garhwa Civil Surgeon NK Rajak. He, however, indicated the limited testing facility which needs to be expedited to check further spread of the infection in the State.

Garhwa remains at second position in terms of positive cases with 47 cases after Ranchi, which has registered 112 cases so far.

“A maximum of 100 samples every day are being accepted by the testing lab at Rajendra Institute of Medical Sciences (RIMS) in Ranchi and hence testing of every migrant is not possible,” said the Civil Surgeon.

Notably, as per the data released by the health department, there is a backlog of over 5000 samples for testing which apparently is due to the limited testing facility available with the State Government.

(THE NEW INDIAN EXPRESS)
279 Days ago