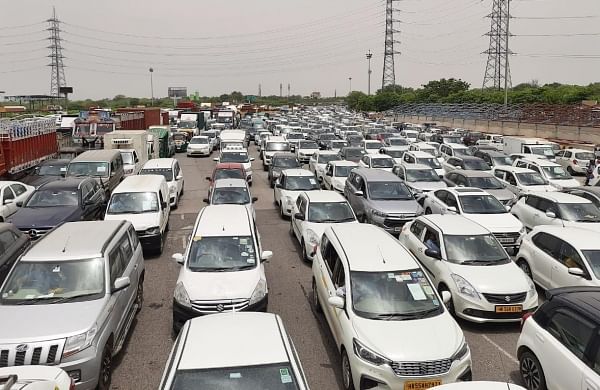 CHANDIGARH: After Haryana sealed its borders with Delhi, a situation of chaos and confusion prevailed at the Delhi-Gurugram border on Friday morning.

The Gurugram police sealed the Delhi-Gurugram-Sirhaul border on National Highway 8, Chakkarpur border on Mehrauli-Gurugram Road, old Delhi road at Kapashera
and other stretches connected to Delhi.

The police opened just one lane of the road at the border for those having valid passes and the vehicles plied for essential services. Many motorists were seen arguing with the cops. Meanwhile, many patients and private hospital doctors claimed that they were denied entry.

Sources said that a large numbers of commuters were stuck at the Gurugram-Delhi border as there was a massive traffic jam for four hours on Friday.

Haryana decided to seal its border with the national capital in the wake of the increasing cases of COVID-19 cases. Haryana Health Minister Anil Vij blamed Delhi for a spike in patients owing to the free movement of people. The total number of cases in Haryana has touched 1721 and of these 520 cases are in Gurugram alone, Vij said.

He said the cases reported in districts (Gurugram, Faridabad, Sonepat and Jhajjar) that are located in the National Capital Region have been spiking despite certain restrictions.

"Only those will be allowed to commute between Haryana and Delhi who have e-movement passes. Essential service providers are exempted from ban," Vij told the media.

The government's order to seal all the borders with Delhi was issued late Thursday night. "Traffic restrictions have been strictly imposed on Gurgaon-Delhi borders in view of Covid-19," Gurugram Police informed in a tweet.

"Only essential services and movement pass holders will be allowed as per MHA guidelines and Delhi HC (High Court) orders." Haryana by Friday afternoon reported 36 new cases of coronavirus, taking the state's tally to 1,540.

On Thursday, the state witnessed the highest spike recording 123 cases. Out of 123 fresh cases, 74.8 percent of cases came from Gurugram (68). Faridabad and Sonepat saw 18 and six cases respectively.