Chemical bath for migrants in UP; Soap spray in Kerala 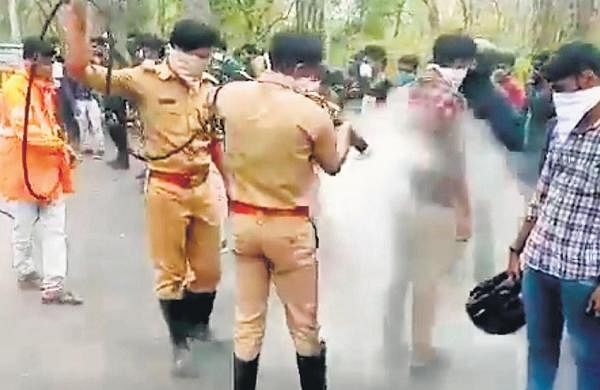 LUCKNOW/WAYANAD: The migrant labourers who managed to travel from Delhi to their home towns in Uttar Pradesh, were welcomed with a “chemical bath” when they reached Bareilly, 280 km from the national capital, according a video that went viral on social media on Monday.

The clip shows hundreds of workers, including women and children, were forced to squat on the road and undergo a ‘chemical bath’ by municipal corporation personnel.The personnel spraying the disinfectant could be heard advising the recipients to close their mouth and eyes. However, many migrants complained of itiching and irritation in their eyes. Dr Sunil Verma, a general physician  in Lucknow, said it was a reaction caused by any solution containing chlorine.

According to sources, the disinfectant was a combo of sodium hypochlorite and water, but district authorities claimed only a plain solution of chlorine and water was used.“We have already taken the cognizance of the video doing rounds on social media. All those who were allegedly given the chemical bath are being treated under the supervision of the Chief Medical Officer of Bareilly,” said Bareilly district magistrate Nitish Kumar.

The Bareilly incident brought to the fore a similar incident in Kerala last week. A video of the incident that went viral on social media showed the Wayanad District Fire and Safety officials spraying disinfectant on people crossing the Kerala-Karnataka border at Muthanga on March 23.However, Kerala officials claimed they did not use any harmful chemicals.

“There are allegations that the firemen sprayed sodium hypochlorite, which is used for sanitising buildings. But the fire personnel used only a soap solution. It was an on-the-spot decision made by the officers on the request of locals,” said A Hemachandran, Director General of Fire and Rescue Services, Kerala.

Not for human disinfection

While sodium hypochlorite or bleach was sprayed on migrants, it is a surface chemical that should not touch the skin or any part of the body

“It is mainly used for cleaning floor and metallic surfaces like door knobs and frames. It is not meant to be used directly on skin or any body parts. It is also not recommended for hand hygiene,” said Dr Naval Kishore Vikram, professor at the department of medicine of AIIMS, Delhi

Direct use on humans can cause irritation in eye and skin and hair problems, added Dr Vikram